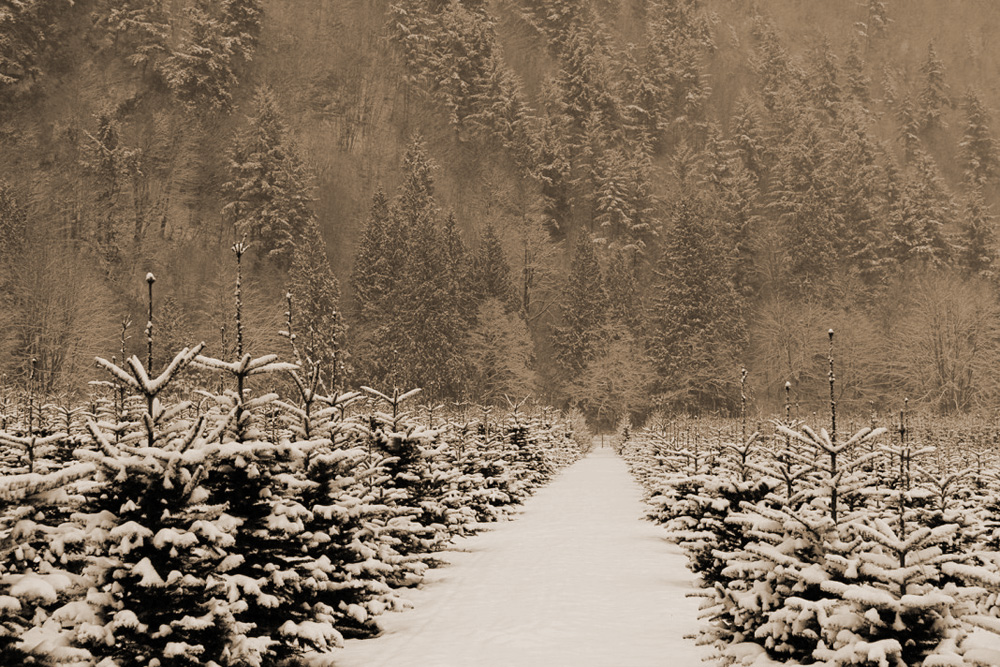 After days of heavy rain, Christmas Day in Bellingham dawned cold and sunny in 1910. The city streets were quiet as people celebrated the holiday with friends and family. It was a calm capstone to a busy holiday season.

By 1910, many Christmas traditions were already well established, from Santa Claus to Christmas trees. And, of course, gift giving. As today, the holidays were important for businesses. Also, like now, technology proved popular, with the Victrola music player and Kodak’s Brownie camera selling well. Amateur shutterbugs could also send their black-and-white photos to the city’s Chemical Art Painting Company to have them painted with colors to send to relatives for the holidays.

Clothing and accessories were the most popular gifts, especially handkerchiefs, gloves, and scarves, both handmade and from the department store. Candy was also a big seller, though the prices look cheap to modern readers. Wilson-Nobles-Barr sold gumdrops (twenty-five cents for three pounds) and peanut butter squares (fifteen cents per pound). The Palmetto Palace of Sweets attracted customers by offering a free candy cane for each fifty-cent purchase. They also sold strings of candy beads for decorating Christmas trees.

In fact, Christmas was such a time of promotion that the Bellingham Herald published a special sixty-four page “Christmas Number” edition of their newspaper on Sunday, December 18. This issue was jam-packed with holiday shopping advertisements, as well as Christmas-themed short stories, history, world traditions and recipes. Written with the support of the Chamber of Commerce, the paper was filled with information about local businesses and industries. The Herald editors encouraged people to send the issue to friends and relatives, to encourage people to move to the city.

As now, many people also focused on helping the less fortunate during the holidays. For example, Bellingham’s public schools collected items for the city’s Associated Charities, a group of private charities that worked together to coordinate their efforts. The students collected hundreds of cans of fruit and vegetables, boxes of apples, clothes, coats, books, and toys.

The city’s two hospitals—St. Joseph’s and St. Luke’s—got into the holiday spirit to cheer up their patients. They decorated their windows with wreaths, distributed gifts to patients, and had carolers visit. The Salvation Army raised money to provide families in need with baskets for the holiday meal and served a holiday dinner to single men at their headquarters at West and Holly Streets. They also held a Christmas tree party at their hall, where gifts of clothes, shoes, and toys were distributed to children whose families were having a hard time.

As the holiday neared, people put up decorations. The Fourteenth Street School sold holly from the bushes on their grounds (three cents per piece), but some did not want to pay and snuck onto the grounds to cut branches during the night. School janitor John Tiedje even found a new (now-ruined) pair of expensive ($1) scissors left on the grounds near the bushes by a holly burglar.

Many groups got into the holiday spirit. The Fairyland Rink held a Christmas masquerade on December 24, offering prizes. Admission to the roller-skating rink cost ten cents and skates twenty-five cents. Clubs, church Sunday schools, and residents held Christmas parties. Many of these were covered in the “Social and Personal” section of the newspaper.

On December 19, the Herald described a party held by the Aftermath Club:

“The children’s Christmas program of the Aftermath club, given this afternoon at the clubhouse, was one of the merriest occasions of holiday fun thus far given. The clubhouse was decorated entirely with Christmas effect, even to a large Christmas tree. The entertainment of the afternoon was partly given over to a cantata [“The Way Out” about Santa and Mrs. Claus visiting a grandmother and her grandchildren]….Between the two acts Miss Hinda Hand and Miss Ingrid Udness sang a duet. The refreshments were very attractive to the children’s fancy, tiny dolls, dressed in red, stood upon each cone of ice cream, and pretty candles adorned the cakes served. Each child present brought a toy which will later be given to the poorer children of the city, and each member brought a toy which was put into a large Christmas pudding, from which the children drew.”

As Christmas approached, people finished the last of their shopping and decorating. The tree usually went up the night before. While electric Christmas tree lights had been invented decades before, they were prohibitively expensive (and required an electrician) for all but the very rich. Many people lit their trees with candles (a tradition the author’s grandfather’s family maintained into the 1940s, even after they got electricity on their farm).

Bellingham also took pains to keep all the jolly from getting out of hand, closing saloons on Christmas day. “A good many Christmas joys, unfortunately,” wrote the editors of the Bellingham Herald on December 23, “will be counterbalanced by the headaches and other pains of tomorrow, following the excessive eating of today. Let this send a warning to be moderate in your enjoyment of the good things this season.”

Whether or not they had been moderate, when Christmas was over, many breathed a sigh of relief. As the Herald wrote on December 25, 1910: “The bundle-bearing brigade, having dumped its load of parcels at the foot of the Christmas tree in order to help Santa Claus out in his game of bluff, may now breathe a sigh of relief and prepare to save up some coin of the realm.” There was another Christmas to look forward to, after all.