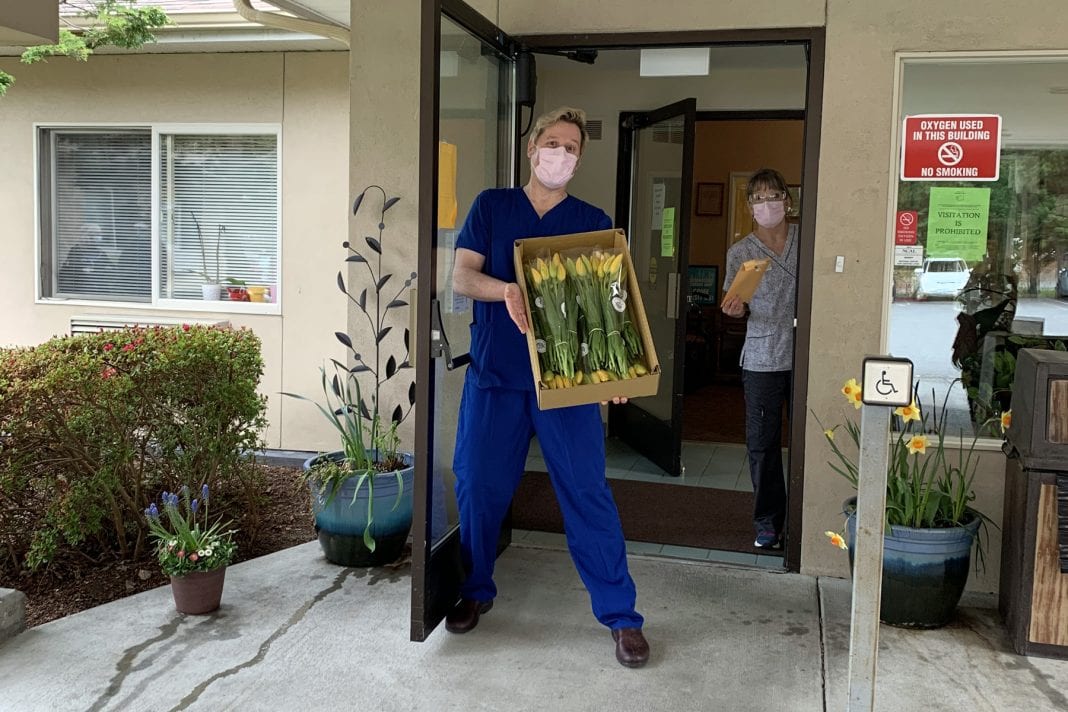 What would you do if you had a building full of people at high risk of illness, and a global health crisis swept through? It’s a terrible question to fathom, but the people living through it are finding that the answer is a wonderful show of love and support from the community around them. “Right now, some people don’t know what to do, so they come together to help,” says Jozef Bosman, executive director of Summit Place Assisted Living.

The majority of support is coming from a group of folks who already have a lot invested in that building. “The families. They’ve just been so supportive. And through the families, some businesses have really come through for us,” says Catherine Reis-ElBara, administrator at Mount Baker Care Center.

Although they serve slightly different demographics, Summit Place and Mount Baker Care Center share both a building and a mission: to safeguard the health and well-being of their elders.

“I think all of us are worried that trying to save people from the virus is impacting their health in other ways,” says Reis-ElBara. Residents aren’t getting out of their rooms as much and aren’t meeting with peers on a daily basis the way they were before. Staff is stepping up to fill those gaps. “Even if they don’t get the virus, not walking as far and not getting outside as often can impact health in a variety of ways, so we’re trying to distract them with some fun things.”

Hallway bingo is one form of entertainment. A family member’s son who has a jazz ensemble came to play on Mother’s Day, underneath a covered patio area, so the residents could hear the music. “One of the families found a bagpiper that works for the Bellingham Fire Department, and he came and played his bagpipes outside of all the residents’ windows,” says Reis-ElBara. “That was just wonderful.”

It’s also important to remember the caregivers. In the best of times, they face a lot of illness and work with people who pass on. Staying positive becomes a job requirement, and much of that support comes from within the organization. “We have an area in our home that’s now designated the “fun zone,” says Bosman. “The staff will pick a thing to do when you walk through. You might have a funny strut when you go through the area, or you dance. There’s hopscotch on the ground to lighten the mood when you go through that area.”

But additional support they’ve seen from outside the workplace—from residents’ families—has had a huge impact. “They had Tulip Town come and deliver over 100 bouquets of tulips as part of the Color for Courage campaign. They went to a sign store and got thank-you signs to put up in the yard. A group of people from a bible study sends us a huge case of Erin Baker’s cookies every week,” Reis-ElBara says. “What lot of families have done is just send cards of encouragement, and we have a big board of all the thank you cards, and that’s really been great.”

Area businesses have jumped on the bandwagon as well, to help take pressure off of the caretakers. Coconut Kenny’s and Haggen’s catering department  have donated lunches to the staff, which Bosman says was especially nice because everyone’s really tired and appreciated delicious, interesting food they didn’t have to pack themselves.

Ciao Thyme provided quarts of soup for staff to take home so they wouldn’t have to prepare dinner. “And they were really awesome—it was hard to decide which soup I wanted because they all looked really good!” says Reis-ElBara. Insomnia Cookies also recently surprised them with cookies.

Families have been supportive of the residents, as well, which certainly takes some of the load off of the staff. “We had a family member purchase three Kindle Fires, so we could use those to let the residents talk with their families,” says Reis-ElBara.

“We’ve been doing a lot of FaceTime, Zoom and Skype meetings with family members,” Bosman adds. “Some residents have a hard time getting the concept that it’s like a phone, and not a television, but they’re getting used to it.”

Both Reis-ElBara and Bosman made it very clear: these showings of support—from cookies and pizza to music and thank you cards—have made a world of difference to the caretakers who devote themselves to making the best of the situation that’s been presented to them.

“The staff truly appreciate all of the love they’re getting from the families and from the community as a whole,” says Reis-ElBara. “And that makes the sacrifices worth it. Knowing that the residents are going to be safe, and knowing that the families have faith and confidence in the staff, definitely makes it worth all they’re doing.”