When Reggie Powell stepped up to coach his sons Darious and Devanté and their friend Damek Mitchell for a 3-on-3 basketball tournament in 2006, he had no idea it would eventually grow into a competitive 5-on-5 club.

“The boys came up with the name D-BLOCK from a song and the initials of their first names,” Reggie says, recounting the origins of what is now a full-fledged AAU boys’ basketball league in Bellingham. “They thought it was really cool and had a real street ball name to it.”

Darious and Damek, who graduate this year from Squalicum High School, were fifth graders and Devanté was in the second grade.

The trio won that first tournament, Spokane’s Hoopfest, and the boys and their coach were hooked.

“We instantly wanted to do more,” Reggie says. He trained Darious, Damek and Devanté at a local church gym and registered for other tournaments. Traveling around the state got spendy, so they began fundraising. A few area parents suggested Reggie up his D-BLOCK coaching game to the 5-on-5 level.

“I loved playing basketball, but didn’t really take it very seriously,” says Devanté. “But as we got older and better, I knew we could go farther than just the 3-on-3.”

In 2010, Reggie held tryouts. “I had eight kids show up,” he says, laughing. He took all eight – including Darious, Devanté and Damek – and the team played in the North Cascades AAU Basketball League, where they went undefeated in their first season.

Devanté more than kept up with his older teammates by knowing the best place for his much smaller self on the court: the perimeter.

“I was definitely one of the shooters,” Devanté says with a laugh. “I wasn’t one of the big kids, so I’d stay out on the 3-point line.”

“He was tiny when he was on the team with Darious and Damek,” Reggie concurs. “He wanted nothing to do with the contact inside – they were all too big.”

Anyone who saw second-grader Devanté play on that fifth grade team would have been unsurprised last year to learn he was a starting freshman on Squalicum High School’s varsity team.

“And he was the second leading scorer,” Reggie, ever the proud father, reports. “He averaged 13.2 points per game. It’s awesome. He definitely put in the time.”

In 2012, Reggie decided that he wanted to take D-BLOCK bigger. His girlfriend, Sheena (Devanté’s mother) told him that if he thought he could manage two teams (fifth and eighth grade), she’d take care of scheduling practices and tournaments.

“Reggie did such an amazing job training and coaching our boys,” says Sheena. “When people became interested in the program, he decided he wanted to provide a great opportunity for hoops to Whatcom County.”

Today, D-BLOCK is made up of teams from fifth grade to high school. Tryouts are competitive, training is serious and teams travel to tournaments as far away as Las Vegas and Florida.

D-BLOCK teams only take part in tough travel tournaments. “The point is getting in a different area and letting the kids deal with different situations,” says Reggie. “It builds their comfort zone and confidence.”

“We started D-BLOCK to be closer to our children and enjoy family time doing what we love to do,” says Sheena, who works full time in medical billing and coding; Reggie is a full-time mechanic. “I knew it would be challenging, but we were definitely up for it.”

“It’s beyond a full time job but I don’t see it like that,” Reggie says of everything it takes to keep the D-BLOCK train barreling forward.

“Sheena may,” he continues, laughing.

Thanks to Sheena’s extraordinary organizational skills, D-BLOCK parents always know where the next practice is and when to book a hotel for the next tournament. “I want to make it as easy as possible for parents,” she says. “People are really busy, so I spend a little extra time to try to make sure their D-BLOCK experience is one of the best.”

Nearly every weeknight finds Reggie on the court, often coaching back-to-back teams at area school gyms. Weekends mean tournaments. He’s quick to point out that Sheena is the organizational muscle that makes it all work.

“She does most of the work,” Reggie says, and then laughs, adding modestly, “I do all of the fun stuff.”

The family aspect is what Sheena enjoys most about D-BLOCK. “It’s one big family of people in our community who have some of the same goals and values,” she says. “And it’s great to be a part of something so positive for the kids.”

Many of our area’s strongest basketball teams are made up of young kids from the same schools. Reggie wanted to open his doors to anyone.

“I just love doing it,” he says. “And if they have a passion for hoops and working hard, come on in. Let’s see what we can do together.”

Nine of the 11 original D-BLOCK players from that first 2010 season went on to play varsity basketball. “It was a huge reward,” Reggie says. And although juggling his full-time job with his D-BLOCK schedule keeps him busy all the time, he doesn’t intend to stop anytime soon.

“I still see the same results, the same little eyes looking up at me,” he says with a smile. “And that’s really rewarding.”

He often hears from parents who want a D-BLOCK girls’ basketball program. “I don’t know if that’s going to happen yet,” Reggie says, though he’s open to the idea. “We would need more coaches.”

Lucky for him, some of his first D-BLOCK boys are now nearing high school graduation and are already asking if they can help.

“It’s going to be cool to have those guys back,” Reggie says.

As for the current D-BLOCK boys’ teams, he sees no change on the horizon. “As long as we have kids come through the door, we’ll keep on going.”

Above all, Reggie wants his players to feel confident in everything they do and to learn that hard work pays off. “And if things don’t go right, you work through it,” he says.

Learn more about the program and watch for tryout schedules at the D-BLOCK HOOPS website. 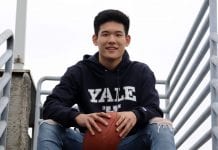 Meet the Red Wheelbarrow Writers: A Writing Association Where So Much Depends on Community