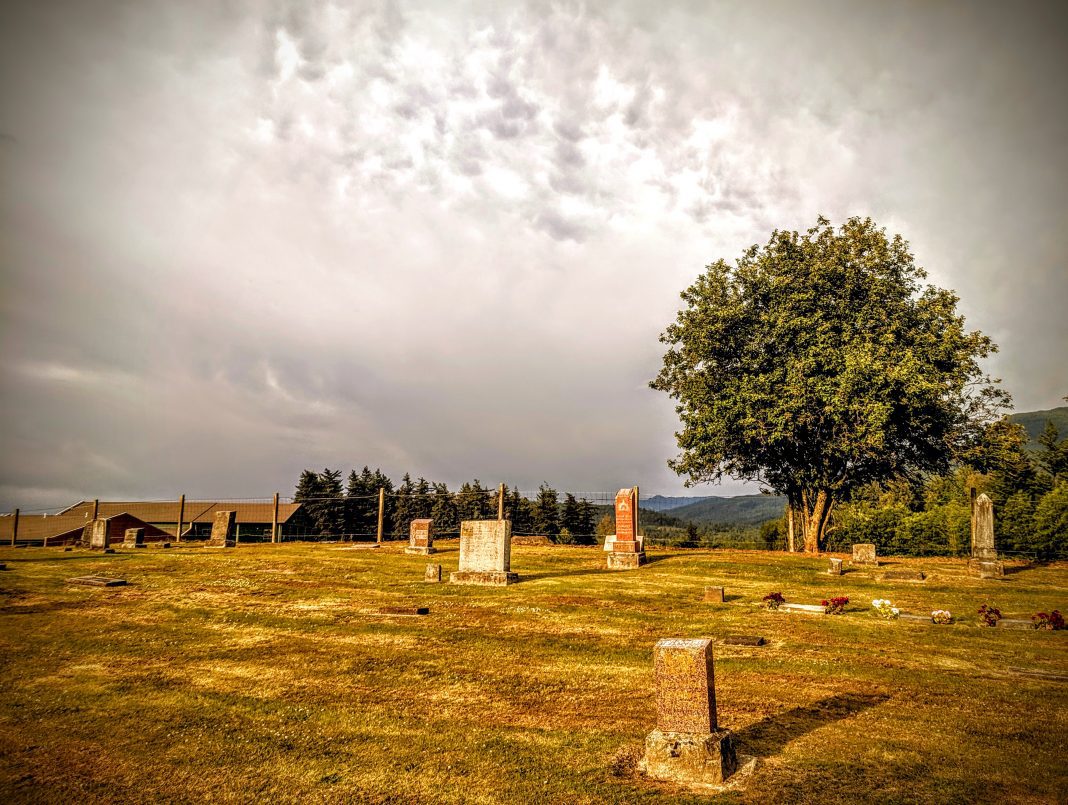 Where did my fascination with cemeteries come from? Maybe it was an aunt who lived next door to a Seattle-area cemetery during my childhood in Crown Hill—a place we were sent out to play in. Maybe it’s my interest in history.

Some graves are flat. The stone is set in the ground—such is the case with most of Greenacres Memorial Park near Ferndale. Some reflect the signs of the times, such as an obelisk from Egyptian culture. Besides being a resting place for the dead, cemeteries are gathering spots and places to honor and connect with the deceased—whether a family member or famous person.

Some cemeteries sit adjacent to churches or other houses of worship. Some are for particular ethnic or religious groups such; some are for members of fraternal organizations, such as Masonic lodge members.

For the historians and genealogists, wagenweb.org lists 65 cemeteries in our community. Another list to peruse is found at genealogytrails.com. One caveat: some cemeteries may be called by more than one (or even two) names. Some of the larger cemeteries are easy to find. Others, you need to really search for and be aware if they’re on private property. Facebook has a group for those interested in exploring cemeteries at the Cemetery Tours page.

These are all great starting points for local cemeteries—large and small, maintained or harder to unearth. Researchers obtain records from multiple public sources, newspapers, and funeral homes, and share the information online.

“For as much as I hate the cemetery, I’ve been grateful it’s here, too. I miss my wife. It’s easier to miss her at a cemetery, where she’s never been anything but dead, than to miss her in all the places where she was alive.”

Greenacres Memorial Park is a “newer,” large cemetery with space for green burial, cremains, and family groups out in the county. Bellingham’s older, historic Bayview Cemetery is located behind the funeral home at the intersection of Lakeway Drive and Yew Street.

The “History of Whatcom County” by Lottie Roeder Roth, who is buried in Bayview, is a respected source for area history. Roth writes on May 6, 1862: “…approximately four acres were purchased from Dan Harris for $150 for a graveyard for Whatcom County. This area, approximately four and a half miles southwest of the present Bayview Cemetery, became known as Deadman’s Point because a number of skeletons, brass buttons, and Spanish arms were said to have been unearthed there.”

In September 1887, the town of Whatcom purchased a 10-acre plot for a cemetery “on the road to Lake Whatcom.” Interments were made by 1888. In 1889, Whatcom and Sehome purchased an additional 12 acres, and in the same year 64 bodies were exhumed from Deadman’s Point and reinterred in this newer cemetery. A trolley used to run along Lakeway to bring mourners to funeral parties.

To read more about Bayview Cemetery, please see this prior WhatcomTalk story, from October 2020.

Few people have seen this, but thousands have driven by along Mount Baker Highway a mile east of Glacier. Park by the trailhead on Glacier Creek road and start walking west. Carefully cross the street and look for a 200-foot-long footpath with a sign. It resembles a movie set with graves set amongst ferns and forest on a 1.3-acre tract. Homes from the Snowline development have edged closer to the back side, which also provides access for hearses to still access the site.

The two Nooksack tribal cemeteries—there are five, total, for the Nooksack tribe total—were originally one until Northwood Road divided the two now at the eastern edge of Lynden. Jobe Cemetery is on the east side of the road and Lynden Jim Cemetery on the west, behind bushes on a hill. The sign is hiding—but it’s there. An adjacent farm was recently demolished for a new housing development around Jobe.

Many assume that this is also one cemetery divided by Front Street, but it’s actually two. Lynden Cemetery is located on the south side of Front Street at Guide Meridian Road. It was started by the fraternal lodges: the Masons and Odd Fellows. Burials were occurring in other parts of town prior to this. Some were relocated and, more recently, monuments have been added to explain the heritage of the site. Tours are offered on Saturdays at 11 a.m.

Monumenta Cemetery is located on the north side of Front Street. In 1902, according to historians, a group of men from the Lynden First Christian Reformed Church formed the Monumenta Society and purchased land (which was all stumps) for the cemetery.

Nooksack Cemetery is located a short distance south of Breckenridge Road in Nooksack adjacent to an elementary school with views of Sumas Mountain. The Nooksack Indian Cemetery, which at one time adjoined this cemetery, is now located primarily near the flag pole in the center of the cemetery with a new rock monument.

At one time, this cemetery allowed families free rein on not only using unusual monuments but in planting small gardens or placing benches atop family graves. Some years ago, for the sake of maintenance, this was changed.