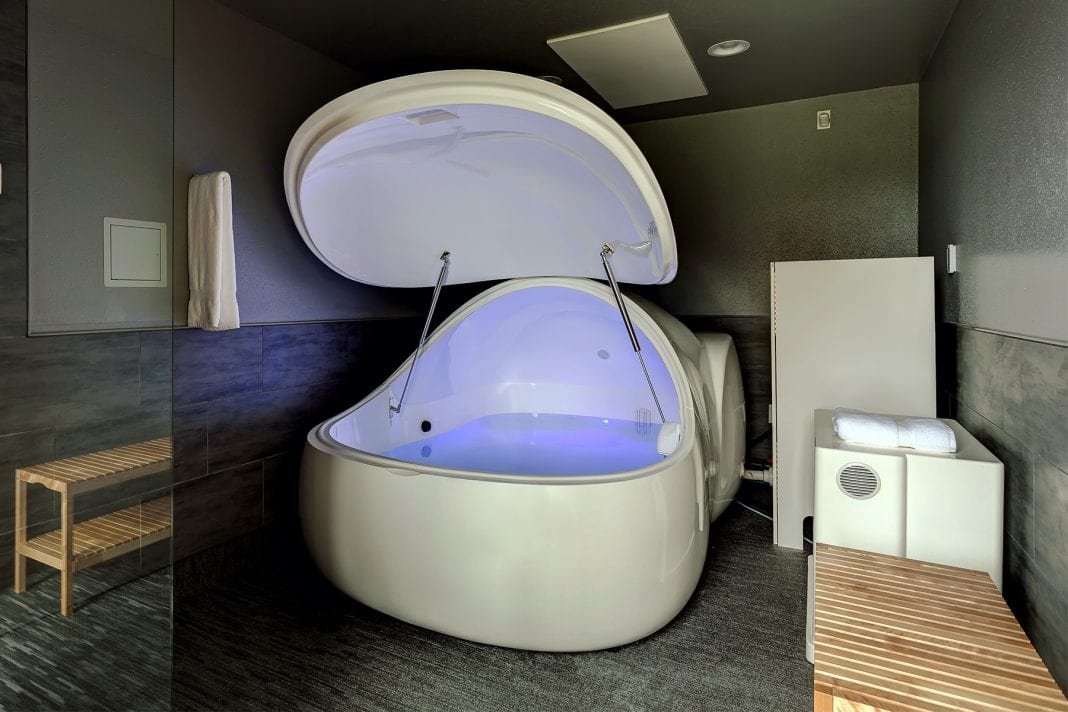 In these tense times, we’re all looking for ways to keep calm and carry on. Or, as a recent poster said, “Keep calm and wash your hands.” One great source for serenity is the local business Still Life Massage and Float, located near the Bellwether Hotel. The five-year-old business, owned by Shannon and Tim Fuller, offers the services of 10 massage therapists, as well as two float tanks.

Float therapy, which began in the 1960s, had a reputation as a little “California.” However, it’s moved past Altered States to be a globally accepted tool to relieve stress, both of the mind and body. Many top-tier athletes believe it’s factored into their success by providing mental clarity, including Tom Brady and Steph Curry. One of Still Life’s regular clients uses the float to calm a child on the autism spectrum. Some find it helpful in alleviating back pain because of the anti-gravity aspect. There’s also evidence that the calming effect reduces blood pressure. As much as science has weighed in on the benefits, the test that really matters is how it makes a participant feel.

Louise Smith, a longtime regular at Still Life, has enjoyed the benefits of float tanks for more than 30 years. She began using a commercial tank, and then installed one in her own home, which allowed her to float for an hour a day. When she and her husband later remodeled the house and no longer had space for the tank, she gave it up. Then she discovered Still Life. “When I started floating again, it was like a switch turned on,” she says. “Oh, how lovely.”

Smith has taught yoga and meditation and considers the float experience to be an extension of those practices. “It’s so restorative. You get in touch with something in yourself that is more unfiltered and pure,” she says. “It becomes about the mind, not the body.”

With age can sometimes come a hesitation to try new things, Smith says. “And we get run amok by our minds. Floating helps us relax, and things are sharpened as we become more aware through sense deprivation. You can view any thoughts as clouds drifting by, and use that as a meditative tool.”

Smith recently suffered a fall and hyper-extended her leg. Floating helped her feel better. “You bob like a cork,” she says, “and feel totally supported both mentally and physically.”

Even without an injury, Smith always feels better after a float. “There’s a value to doing things passively as opposed to actively,” she says. “Nothing is something worth doing!”

She then shares a favorite quote from Pico Iyer’s The Art of Stillness: “In an age of speed, I began to think nothing could be more invigorating than going slow. In an age of distraction, nothing could feel more luxurious than paying attention. And in an age of constant movement, nothing is more urgent than sitting still.”

Still Life’s 5.5 x 7.5 foot float pods are filled with 1,200 pounds of Epsom salts, and that much salt keeps you afloat without effort. The water is kept at 96 degrees, which helps your senses lose the boundaries between skin and water.

The pods are modern and pretty. Some people leave the lid open a few inches, but that does not give the full deprivation benefit, as you can still feel temperature and light delineations. There’s a call button and light switch inside, and the lid works on hydraulics, with no latches.

When your session is over, gentle music will turn on to let you know your float is ending, and there is a shower in each room that you use before and after the float. To keep the water sanitary between clients, the closed water system completely circulates four times through, a 1-micron filter and UV light that uses nanocrystal technology after every use.

Tim Fuller says that you can start to feel the release of tension after about 20 minutes of the sensory deprivation 60-minute session. He says “I feel like I’m in space” when he uses the tanks. “Your brain waves fall from the active alpha and beta waves to slow moving theta waves as you relax.”

People float to relieve stress, recover from injuries, or just to relax. According to Still Life, “Floating naturally increases your dopamine and endorphin levels, boosting your mood and leaving you with a pleasant afterglow that lasts for days. Everything you experience while floating comes from within yourself and allows you to experience a quiet mind.”

A quiet mind seems like a worthy goal these days.

The company began as a wellness clinic, with roots in medical massage, and later expanded its offerings with float therapy. Ten massage therapists work with clients at Still Life, as well as the two float pods. Still Life is open seven days a week, from 9:30 a.m. to 6:15 p.m.