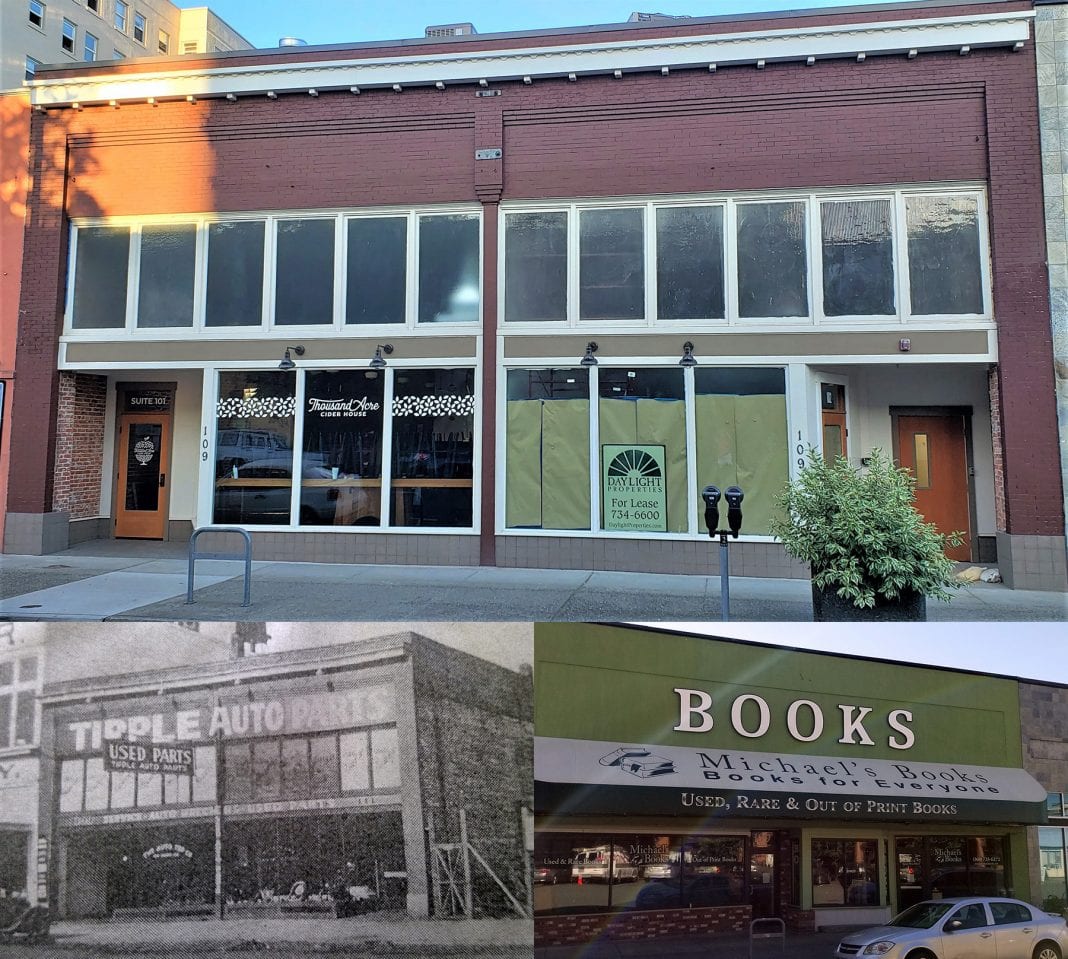 Formerly the site of longtime bookstore Michael’s Books, the Grand Building at 109 Grand Avenue has been converted to a mixed-use commercial and residential building.

The building was reduced to its bones and essentially rebuilt, Robert Hall of Daylight Properties says, from small rooms with low ceilings and no windows, to one with high ceilings and natural light.

“The transformation was very dramatic,” he says.

Along with the two new businesses in the building, there are three new apartments. These apartments maintain much of the original structure and charm of the building, but have been upgraded with modern fixtures and appliances.

“We’re thrilled to have another historic building restored,” says Rick Sepler, director of planning and community development for the City of Bellingham. “The new storefronts look great.”

From Then to Now

The brick building at 109 Grand Avenue was originally designed by William Cox, according to Whatcom Museum archivist Jeff Jewell. Constructed by the firm Ecklund & Harris between 1911 and early 1912, its first tenant was Wilson Feed & Grocery, a wholesaler in hay, grain, flour, feed and groceries.

Over the years, the building was home to many different tenants, including a slew of car dealers selling Oldsmobiles and Fords, among other brands, and then an auto parts store (see picture). It became a floral shop in 1929, and then a grocery store from 1932 into the 1950s. A photography studio followed in 1955, followed by a Cascade Natural Gas office throughout the 1960s.

During Cascade Natural Gas’ time in the building, customers were able to drive down a ramp that went through the first floor of the building to pay their bills at a drive-thru window.

For most Bellinghamsters, the building is best known as the site of Michael’s Books, the longtime independent bookstore that closed at the end of 2015 after 32 years of business. After sitting vacant for a couple years, Daylight Properties decided to purchase and completely renovate the building. Daylight’s team is also working to have the building added to the National Registry of Historic Places.

Hall says he became interested in the Grand Building when it was put up for sale about four years ago. Unfortunately, it was immediately snatched up by an out-of-town investor interested in tearing it down and building an apartment complex on-par with the nearby Mount Baker Apartments. The investor eventually backed out of the deal, allowing Hall to view the building.

One of Hall’s intentions in purchasing and restoring the building was to help revitalize the area of downtown where it’s located. With other buildings in the area already in his portfolio (120 Prospect Street, 201 Grand Avenue), he saw the opportunity to rehabilitate a building that would renew the look and feel of the whole neighborhood.

There was only one working bathroom, and large barrels to catch water leaking from the roof. The 7,000-square-foot layout had multiple small rooms with no natural lighting, and thousands of books were still in the building. Again, another party attempted to buy the building before Hall, but about six months later that also fell through. Hall then bought it, with the condition that Daylight would handle all repairs after the books were removed. It took months to clear everything out.

“It was in a horrible state of disrepair,” he says.

As the oldest structure on its block, Hall says he assumed the Grand Building already had historic status. But because years of renovations had altered its original appearance so much, it hadn’t been added to any historic registries. To get it on the national registry, Daylight had to basically restore the Grand to its original appearance. This was especially difficult, as the only photo they had for guidance was taken from a hot air balloon in 1907.

The structure’s new life as a residential building is especially positive for Bellingham, which saw a massive hit to new housing projects when the Great Recession struck at the end of 2008, Sepler adds. For years afterward, a shortage of housing resulted. Recently, however, rental vacancy rates have increased, suggesting supply is finally catching up with demand.

“Last year, we issued over 1,000 permits,” Sepler says. “That’s the most permits we’ve issued for units in at least more than 10 years. That’s remarkable. I think we can see a very robust construction industry in our community.”

Tara Sundin, community and economic development manager for the City of Bellingham, agrees, and every project, including the Grand Building, helps.

“Retaining and renovating the residential portion of this property is great for downtown and our community as a whole,” she says.

The Grand Building’s new commercial tenants are excited to be there. One, Thousand Acre Cider House, has been open since August 2019, while the second—Italian restaurant Storia Cucina—is aiming for a March 23 grand opening.

Jenny Hagemann, owner of Thousand Acre Cider House, says she fell in love with the building’s historic attributes of exposed brick and original flooring. Compared to its previous iteration as a bookstore, Hagemann says people have a hard time believing it’s the same place.

“We get customers all the time coming in to take a peak,” she says. “They say, ‘We can’t believe this is the same building.’ It’s been a total transformation.”

Hagemann says business has been good so far, and hopes they continue growing as Bellingham continues to grow.

For Storia Cucina owner and Executive Chef Jonathan Sutton, along with Chef de Cuisine and partner Arlen Coiley, the Grand Building offered their new business a character that no new building possibly could.

“It isn’t just some cookie-cutter building with no history to it,” Sutton says. “Walking into the space and seeing the original brick was fantastic, and the fact it used to be a bookstore kind of ties into our name. ‘Storia Cucina’ is ‘kitchen story’ in Italian. There were tons of stories to tell within these walls before we were here.”

The building’s 18-foot-tall ceilings and open space design was especially attractive to both tenants, with natural lighting coming in through large, street-facing windows. In Storia Cucina’s space, a skylight over the kitchen helps enhance it as the restaurant’s centerpiece, Sutton says.

Last-minute trim and lighting work is being done, and the restaurant will feature a large illustrated mural of an Italian dinner scene, he says. When it finally opens, Storia Cucina will offer uniquely creative and affordable selections of fresh pasta, pizzas, and cocktails.

“We’re excited to be part of the Bellingham community,” he says, “and make Grand Avenue even more of a happening place.”

For Daylight Properties, it’s another successful renovation and a fresh start for one of Bellingham’s historic buildings.

All photos courtesy of Daylight Properties