Nearly two decades on a roof, however—constantly exposed to the elements—took their toll on this bright beacon of Front Street. This year, the star simply wasn’t usable without a substantial repair job. So Kevin Seutz—who’ll take ownership of Dutch Mothers on January 1, 2020 after acquiring it from longtime owners Dave and Debbie Black—decided it’d be nice to get the star fixed in time for Lynden’s Northwest Lighted Christmas Parade.

Suetz and Signs Plus owner Jim Sutterfield have been good friends for 18 years, and the two decided to work collaboratively on this community project, with Signs Plus donating all of its material and labor. On November 20, a Signs Plus team arrived outside the restaurant, carefully removed the star from the roof, placed it on a truck, and took it back to the Signs Plus shop for repair. When it takes to the roof again, on December 7, it will shine brightly for all of downtown Lynden to see.

“We enjoy community projects like this,” says Sutterfield. “When we have an opportunity to be involved in something like this, it’s cool, because we don’t get to do these kinds of things all the time. It’s a way to give back to the community and do something different. It’s not just a sign.”

Debbie Black, who’s co-owned the restaurant with her husband since 1996, says the Dutch Mothers Christmas star was first lit in the early 2000s, not long after Seutz and his wife Belinda opened their restaurant, The Rusty Wagon, off Hannegan Road.

Around this same time, fundraising galas were held to buy large, lighted symbols with which to decorate downtown Lynden. From Dutch figure skaters to a lane of tulips, the decorations were a hit. The largest piece of lighting, Black says, was a nativity scene, which went up across the street from Dutch Mothers. The scene had just about everything a nativity should have, except for the star of Bethlehem.

That’s when a friend of the Blacks, an Intalco aluminum smelter employee named Wayne Crenshaw, suggested that Dutch Mothers add the star. When he was a child, he told the Blacks, his father would take him to downtown Seattle each year for the Bon Marche Christmas star lighting ceremony.

“He said, ‘We could do a replica of the Bon Marche star,’” Debbie Black recalls. “So a bunch of guys from Intalco said, ‘If you supply the pieces, we’ll make that a project.’”

The end result was a roughly 12-feet wide, more than 20-feet high star that became an annual presence in downtown. Originally, the star was built on a hinge, with the idea it’d lay flat on the roof when Christmas was over. But for whatever reason, it never worked properly, and the star remained in place, unlit, the rest of the year.

Weather battered the star through the years.  By 2018, Black says the wiring was bad, and several light bulbs simply fell off the star and broke on the street below. They knew the star wouldn’t be usable without work, but the city really wanted it back up, Black says.

Part of the Community

Sutterfield says the project to resurrect the star wasn’t too challenging, given the expertise of Signs Plus employees, but it still had its struggles.

“It was a bugger to get off the roof,” he says.

Signs Plus workers carefully disconnected the star from the roof, attached it to a crane, and took it away. Back at the shop, the star will get a newly fabricated structure to mount it to the roof. The star will then be repainted before Operations Manager Paul Lachapelle carries out light replacement, putting in brand new LEDs and ensuring the sign is fully up to electrical code.

The goal is to have it lit by the evening of December 7, in time for the parade. After the holiday season, the star will be properly stored on the roof until the following Christmas.

The fact Seutz would finance the star’s repair before he even owns the restaurant, Black says, shows just how much he cares about the community and its traditions.

“I get a little bit emotional about it,” she says, slightly choking up. “It really means a lot.”

Seutz has a long-standing connection to Dutch Mothers and the surrounding downtown area. He was born and raised in Lynden, and once lived just behind the restaurant. Big on supporting the communities who patronize his businesses, getting the star back up and shining was a no-brainer for him.

“It’s been here for so long that I really wanted to resurrect something that had such meaning and was just a beautiful thing for the city,” he says. “I just want to give back to the community.” 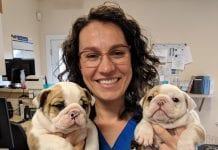