Recent health studies have found that neighborhoods across the country – and often only a mile apart – can have a life expectancy of five to ten years fewer than their neighbors. Factors like income, genetics, culture, access to resources, quality food and healthcare have drastic effects on life expectancy.

Unity Care NW aims to level the gap in Whatcom County with a new program called Population Health. The plan focuses on improving the overall health of entire groups or populations as opposed to one patient at a time.

The goal of their initiative is to “increase the years of healthy life in the communities that we serve,” says Kyle Davidson, population health director at Unity Care NW.  “Forty percent of a person’s health status, how healthy they are, is determined by social and economic factors,” says Davidson. “The part we’re involved in – the health care piece – is a small part of what makes someone healthy or not.”

“I worked in human services for a long time,” says Delvalle. “One of the things that I’ve come across working with patients that are homeless is that they aren’t focusing on going to the doctor, eating healthy or exercising.” Instead, they’re focused on where their next meal is coming from and where they’ll sleep that night. “

These concerns place a barrier to health care. Health care workers try to remove these kinds of barriers, “so they can focus on going to the doctor and getting healthy,” says Delvalle.

“We work with partners like the Opportunity Council and YWCA to find housing,” he says. “If transportation is an obstacle, then [health workers will] find different means of transportation to get them to their appointment. If it’s food, we’ll connect them to a local food bank.”

There’s no problem too big for health workers to tackle and they work with a variety of populations from teens to diabetics. Community health workers develop trust with patients, assisting them with overcoming obstacles.

Some patients, for example, are taught from an early age to fear doctors. “There are patients that don’t want to go to the doctor because when their dad or grandpa went to the doctor, something was diagnosed, or they died later on,” says Delvalle.

Health workers develop relationships with people and give reassurances that they’ll be well taken care of. Many people don’t know what to expect from the health care industry and have never had health insurance. Community health workers also help the uninsured through the process of signing up for health insurance.

We want “to give a warm hand-off to a provider here and make them feel less scared and more comfortable with going to the doctor,” Delvalle says.

“We’ve seen patients who didn’t have insurance for so long that the ER was what they knew and what was familiar to them,” says Jennifer Moon, communications and public relations associate with Unity Care NW. “Part of [the program] has been a cultural change; to try to work with people who are now insured and tell them they can come to a health care provider and get primary care.”

Unity Care NW learned about a patient who was the highest utilizer of emergency room services – who regularly called 911 and was well-known by first responders.

They found that the patient’s underlying problem was mental illness, which was not being addressed effectively. “The staff at Unity Care were able to engage with [the patient] in a deeper way and begin to address those behavioral health issues,” says Davidson.

Health workers brought the patient in to receive quality care from a health care provider and reduced the person’s use of 911 services.

Now, the patient is healthier and feels more comfortable with the general system – and is happier and healthier overall. First responders are freed up to answer to more urgent calls, and it has saved a lot of money and time for the entire healthcare system.

“In this country, we have the most expensive healthcare system in the world, but our health outcomes are not the best in the world,” says Davidson. “We’ve had to think about how we can get better outcomes for lower cost and satisfied patients.”

Unity Care is working to increase the years of healthy life for the Whatcom County community. If you have a question or would like to get in touch with a Population Health representative, contact Unity Care NW.

Am I Eligible for a Vaccine? Where Can I Get One? Whatcom County Health Department Answers Your Questions 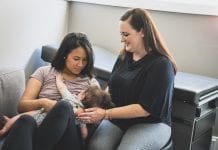