Amy and Rylan Schoen are solving their own problem.  If you have ever wanted to go out for a beer without leaving your dog at home, step inside Bellingham’s first dog friendly bar, Paws for a Beer, in Fairhaven on Harris Street.

The two began to think of opening their own dog bar after juggling the desire to go out for a beer with the needs of their dog Crosby, a black lab border collie mix. “We kind of wanted to go out and do our thing like visiting one of the local breweries that we love around here,” says Rylan.

“It didn’t really work for Crosby,” Amy explains. “He wanted to run and go.” They both wished for a place where they could enjoy a beer and the company of their furry family member at the same time. The couple decided to make the one thing that they needed.

When they shared their idea of a dog friendly bar, Amy and Rylan received a lot of positive feedback from friends and the community. “The second we started dipping our toes into Fairhaven, which is where we live, businesswise the response was so friendly and supportive,” Amy shares. “We have really good friends now in the animal community that we wouldn’t have known otherwise.” They were also able to generate revenue for the start-up through Kickstarter where the couple raised $10,000 in 30 days.

Working through the process of opening a brick-and-mortar business was new for Rylan. For the past several years, he has been a freelance back country photographer who photographs landscapes and sponsor photos for professional athletes on Mount Baker. “I’m having a lot of fun putting the business together,” he expresses. Amy, a kindergarten teacher for Promise K, looks forward to helping out in the bar each day when school lets out. Both plan to bartend daily as well as run the day-to-day operations. “We’ll be here for the lunch crowd and we’ll be here for the after dinner crowd as well,” Rylan shares.

A dog-friendly bar impacts what can be served. Rylan and Amy opted to stay exempt from the health codes by not serving any containers that need to be washed. Paws for a Beer serves local canned beer and bottled beer is poured into a compostable or recyclable cup. Glass is not allowed out on the premises simply to protect dog paws from broken glass. They also plan to sell six packs for those 21-and-overs who are out walking their dog and want to take some beer home. And in addition to beer, wine will be served. “We got a taverns permit for beer and wine,” Rylan shares. They also plan to invite food trucks to park on site for customers wanting a bite to eat as well.

To set up the dog ambience of the bar Rylan and Amy have had some professional advice. “We’ve been working with a dog trainer and she has been guiding us on how to design it with even a big double gate entry so dogs can immediately get off leash,” Amy shares. Off-leash is the standard for Paws for a Beer. Leashed dogs tend to have unwanted anxiety, a feeling the couple doesn’t want dogs to have in a bar designed to feel like home.

Inside Paws for a Beer, dogs are allowed on couches. Outside, beer holding owners and dogs can enjoy the fenced yard. The goal is for dogs at Paws for a Beer to feel comfortable so dog owners can connect. “As Amy says, we are here first and foremost for the dogs. We really do want to create a community of better dogs and happier dog owners,” Rylan shares.

While Paws for a Beer is open to the public, dogs have membership status. Membership requires certain current vaccinations and dogs must show they can be relaxed in a dog friendly social environment. “Membership is per dog, with a signed liability release, simply letting us know you are vouching for your dog and all of the rules that we stipulate,” Rylan shares noting the rules are posted on the outside of the building.

To fit in with the Bellingham beer vibe, Amy and Rylan voice that the Paws for a Beer atmosphere is a “subdued dog bar.” Born out of the love for their dog, the couple really hopes the bar will be a good fit for other dogs and owners in the area wanting the same thing. “I think if it is a big success for the dogs then we’ve done something really right for Bellingham,” Amy shares. “If they are happy to show up and happy to be here and sad when they leave, then we’re a success.”

To get more information, visit Paws for a Beer on Facebook. 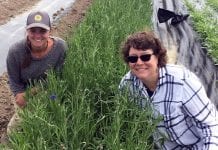 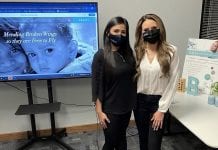 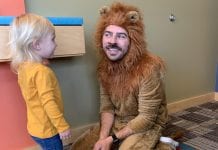