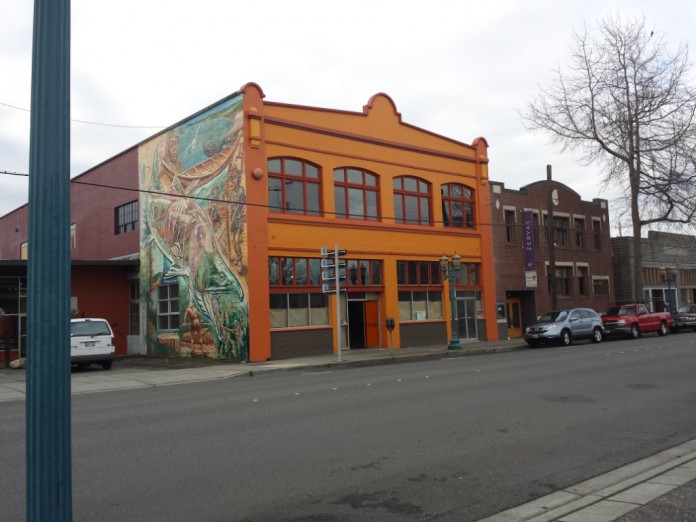 The wonderfully eclectic and original iDiOM Theater announced that it will relocate this summer, after 14 years at its Cornwall Avenue location, to a new Whatcom County arts community hub, Sylvia Center for the Arts.

Founded by Glenn Hergenhahn-Zhao in 2001, the iDiOM Theater has premiered hundreds of original plays by accomplished artists who live in or have deep ties to the Bellingham area.

The theater is known for its irreverent and creatively unique productions and its nurturing of up-and-coming talent, including writers, directors and actors.

The theater became a non-profit in 2009 and shortly afterward began considering a move. Space became a limiting factor in the existing Cornwall Avenue location as the theater grew its audience and productions. “iDiOM will be drastically changing what we’re doing,” explains Artistic Director, Glenn Hergenhahn-Zhao. “When we make the jump to the new space, we’ll go from our existing seasons of 42 to 44 weekends of performances to 20. We’ll put focus on fewer productions…and what that does is…it makes the vast majority of the weekend open for other people in the community to use the space, which was our hope.”

The need for performing arts space in the Bellingham area is not new. Back in 1992, a long-term city planning report by the Regional Urban Design Assistance Team included in its recommendations the need for the development of a central arts district and facility. The report suggests the former Cascade Laundry building at 205 Prospect Street as an ideal location. It’s no coincidence that this building will be the future location of Sylvia Center, just a few blocks from iDiOM’s current location.

Other arts organizations — including a number of veteran and new theater and dance production companies — have also been in need of performance space. In 2013, Kuntz and Company led an indiegogo.com campaign that raised over $50,000 but fell short of its $300,000 goal needed to create a 200-seat performing arts venue on Commercial Street. That effort may have paved the way for Sylvia Center. “I am excited about the possibilities this arts center brings to our community and I look forward to supporting Glenn’s efforts in realizing this space,” says Kuntz and Company Founder and Artistic Director, Pam Kuntz.

Although Sylvia Center could open as soon as May for classes and rehearsals, many details have yet to be solidified. “We’ve been doing a delicate dance with this project to try to get it far enough along that we could bring people into the fold,” explains Hergenhahn-Zhao, “but we purposely left as many details out as possible so that we can bring other people from the performing arts community into the conversation. That includes the design of the facilities, and the calendar, and what organizations are going to be utilizing the space.”

Sylvia Center hopes to include members of the dance, theater and music communities as well as other forms of performance, including storytelling, literary events, speakers, festivals, circus acts and anything else the community might need.

More than 80 people came out for the February 27 announcement, which officially introduced Sylvia Center for the Arts. The center is named for Sylvia Scholtz, a lifelong supporter of the arts and front-row-center patron of the iDiOM for almost every show of its early years while she was in her 80’s.

“[Sylvia] was a remarkably energetic person…. If you were going to pick someone as a symbol of personal support of the iDiOM, she’s a good choice…The iDiOM, and Glenn, and Krissa [Woiwod] meant a ton to her. She was incredibly proud of it for Bellingham and interested in its progress,” remembers Sylvia’s grandson, Mallard Ice Cream Owner, Ben Scholtz.

“…it was refreshing that Sylvia was very, very encouraging of experimentation and taking risks in theater and the arts,” adds Hergenhahn-Zhao.

Built in 1966, the renovated Cascade Laundry building will include two new theaters — a 75-seat Studio Theater and a 160-seat Main Stage Theater. Seating in the smaller Studio Theater will be flexible to accommodate a range of theater, dance, music and other special event performances beginning in fall 2016. The space will include a dance floor and sets will be moveable to allow use for classes and rehearsals. “The Studio Space is a little further along in development because it’s simpler and it will be open soon,” notes Hergenhahn-Zhao.

Soundproofing is planned so that productions can run simultaneously with the Main Stage Theater, without mutual disturbance from the planned café and bar space that will include a live music venue. “We’re still talking to community members about their needs and incorporating that into the design of the Main Stage, making it as flexible as possible,” explains Hergenhahn-Zhao.

The Main Stage that is slated to be ready for use in February 2017 will use a modified thrust stage design and raked seating that allows for quality viewing from any seat and variation for each production. Acoustics are planned to be suitable for both amplified and unamplified sound.

The new space will also feature an art gallery and a large green room for actors and performers, an element especially limited at iDiOM’s existing space. Both theaters will be equipped with state-of-the-art lighting.

Sylvia Center for the Arts has a long, hard, exciting road ahead of her. The total cost of the project will be $1.4 million, which includes $400,000 the building’s landlords will contribute in building updates, plus $350,000 of seismic work, and $100,000 of tenant improvements that will go toward the center’s eventual restaurant. iDiOM will be holding fundraising efforts in the coming months to help cover the remaining $550,000 needed to complete the project.

The iDiOM will finish out its fourteenth season of daring, innovative productions at the Cornwall Avenue location before saying goodbye in June. But that sadness will be fleeting as iDiOM embraces its 2016-2017 season at the vibrant, new Sylvia Center.