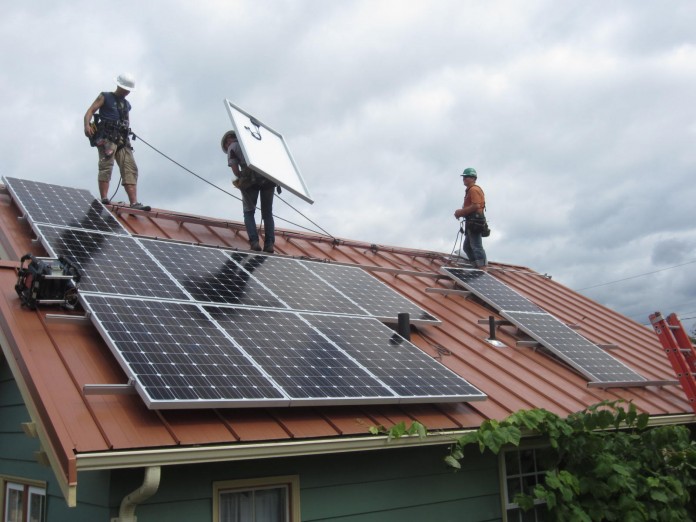 Many might be fooled into thinking that solar isn’t economical considering our dark Pacific Northwest winters. However, local business membership organization Sustainable Connections has teamed up with Whatcom County solar designers, installers and manufacturers to squash that myth by offering free educational workshops throughout the spring. The Solarize Whatcom Campaign intends to streamline the process while passing along significant discounts to homeowners and businesses, all while benefitting the community by supporting the local green economy and equipping Bellingham Food Bank with its very own set of solar panels.

Sustainable Connections’ Energy Efficiency and Renewables program was recently awarded a grant to bring the Solarize Whatcom campaign to the county, a plan originally developed in 2011 in Portland, Oregon with the Seattle-based non-profit Northwest Sustainable Energy for Economic Development (SEED). “Among the goals of Northwest SEED has been an effort to coordinate across jurisdictions to reduce financial barriers associated with solar conversion and installation,” Lathrop explains.

The path to solar is relatively simple, but making an informed decision involves considering a number of factors. Questions are common about the overall process, the available panel and inverter technology, local, federal, and state tax and production incentives, existing architecture and aesthetics, permitting, and financing. “These solarize workshops cover all of this information efficiently so it really streamlines the process for both the homeowners and the installers,” Lathrop notes.

Partners of the Solarize Whatcom campaign include three locally owned and independently managed Whatcom County businesses who are also members of Sustainable Connections. “Western Solar and Ecotech are our designers and installers, each with a great reputation,” Lathrop says. “They both agreed to discount pricing for this campaign, as did the panel and inverter manufacturer, Itek Energy.”

Founded in 2011 by John Flanagan, Itek has created more than 75 full-time green jobs in Whatcom County while sustaining the area economy. “Itek is a great company and their presence here eliminates the need for, and the associated cost of, California distributors that previously sourced solar materials from as far away as Japan,” Ecotech Owner and Founder, Dana Brandt, explains. “That reduces the cost to homeowners and the environment by reducing fossil fuels used for transport.”

The Time is Now

State and federal tax and production incentives make solar a solid choice, but the climate is shifting. “Available incentives now include a one-time federal tax credit for 30% of the system cost recently extended through 2019, a state sales tax exemption through mid-2018, as well as the Washington State Production Incentive of $0.54/kiloWatt-hour available through July 1, 2016. Supply and demand has also brought down the overall costs each year,” says Brandt, a Bellingham-native educated in renewable energy in Europe.

But current bills in the Washington Legislature will include revamping in the existing state production incentives, meaning that both home and business owners, as well as installers, will be scrambling to convert as many homes as possible to take advantage of existing rates before they change on July 1, 2016. “It’s a very interesting time in the solar world,” Lathrop says. “We’ll see what happens, but at the end of the day, now is the best time. The financing we set up through Puget Sound Cooperative Credit Union offers very low-interest loans and no money down. It’s super easy. If you’ve got a roof, you could have your loan paid back in four-and-a-half years, and then you could be making money after that.”

Turns out, solar is also a wise financial investment for homeowners because it can increase the resale value of their home. “People now recognize the value of solar and so houses with solar are selling faster and for more. That allows for a greater return on the investment, even in the shorter-term of only five or six years,” Lathrop adds.

A highlight of the Solarize Whatcom campaign is how it will give back to the community for decades to come. “Itek is going to donate one panel for each contract signed, and the installers are going to donate their time and some materials. We’re hoping to get at least 20 to 30 contracts signed so that we can create a pretty big array,” Lathrop says, beaming. “For every $5 the Food Bank isn’t spending on their electricity bill each month, that will provide 50 pounds of food for hungry Bellingham families.

The response to this program has been so impressive that Sustainable Connections has added additional workshops to accommodate interest. Contracts must be signed by April 30 and installation completed by July 1 to receive the discounts and incentives offered in this campaign. “Sustainable Connections’ Community Energy Challenge is another great way to make conscious energy choices. We conduct a thorough energy assessment for local residents and businesses. We then develop a customized energy action plan that includes utility and tax rebates and incentives. Solar is just one piece of that assessment,” Lathrop notes.

The Solarize Whatcom campaign appears to be a win-win situation for everyone. “We’re not only helping community members save energy, save money, increase property values, and reduce climate change, but we’re also helping our local green businesses — solar designers, manufacturers and installers — really thrive,” Lathrop says. “We’re offering solar at the lowest prices Whatcom County, and probably all of Washington, has ever seen, so this is a really good deal for folks.”

For more information about Solarize Whatcom and a list of upcoming workshops, visit Sustainable Connections online.