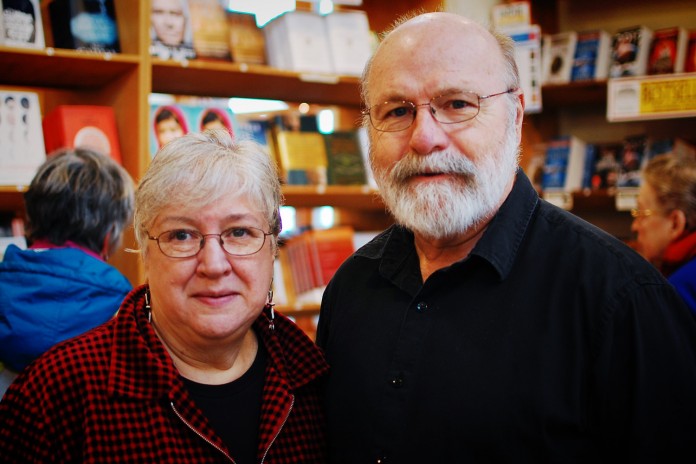 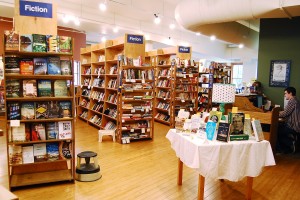 “The mission of the business is to build community,” says Chuck Robinson of Village Books, the popular Fairhaven bookstore he and wife Dee Robinson opened in 1980.

“Obviously, we have to make a living for the people who work here and business has to be profitable to be able to stay around,” he continues, “but we’ve tried to build something that’s as much a community center as a place that sells stuff.”

Anyone who’s spent time in historic Fairhaven would agree that Village Books is, indeed, the heart of the district.

Village Books continues to thrive by doing what so many independent bookstores have not: grow, innovate, and remain a central part of its surrounding community, while continuing to welcome book-buyers through their doors year after year.

The store carries new, used and bargain-priced books. Titles can be purchased online and shipped for just 99 cents if one chooses USPS Media Mail rates. It also sells e-books through its website.

Adjoining Village Books is Paper Dreams, the greeting card and gift store the Robinsons launched two years after the bookstore opened its doors. “We were increasingly seeing more things we would like to sell that were not books but we didn’t want to dilute the feeling of a bookstore,” says Chuck of the expansion into a non-book sister store. It would prove to be a prescient move. 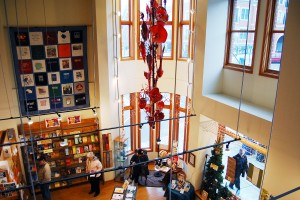 Village Books originally opened in the south half of the space now occupied by Paper Dreams. The bookstore eventually expanded over and down, before building its fantastic new space in 2004 on the north side of the gift shop – a brand new structure that fits in perfectly with Fairhaven’s character.

“People still talk about the ‘new’ building – and it will be 10 years old later this year,” Chuck says with a smile.

A Motor Home & A Dream

Chuck and Dee Robinson dreamed up Village Books while driving around the country in a motor home at the tail end of 1979. They’d each left behind a 10-year career in special education in Illinois, as well as family and friends they held dear. They also left the Midwest with a comfortable chunk of change from the sale of their home.

“We thought we had enough money to open a business,” Chuck says. “Turns out, we did.”

Chuck, who says he’s the more impulsive of the two, tells how that mere mentioning of a possible shake-up to their quite-fulfilling status quo ultimately altered their lives – and the community of Bellingham.

“We were sitting around on a late afternoon Sunday, having had a nice weekend at home, and suddenly Dee says, ‘You know, sometimes I’d just like to be rid of all this stuff and take off.’ She’s lucky I wasn’t in the car outside like that,” Chuck says, laughing. 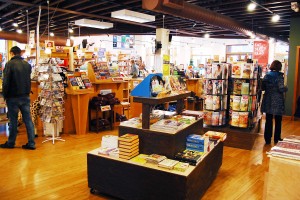 The couple had built a 3-bedroom house a few years before that was full of stuff. They loved their jobs. But after Dee’s comment, they began to wonder what else might be out there for them.

“We decided we were going to take a year off to travel, and planned our taking off very carefully,” Chuck continues. Ultimately they bought and remodeled a motor home and sold almost everything they owned.

As their departure date neared, in August of 1979, the couple began to question if they’d return to Illinois. During their travels, they cemented their decision.

“We decided maybe we wanted to live somewhere on the West Coast, somewhere between here and Santa Rosa, California,” Chuck remembers. “We thought we could stay in special education and get jobs out here, but maybe we should try something else.”

The couple had always had what they described as a vague romantic notion of possibly owning a bookstore and living above it. They realized it might be time to make it a reality.

“So we started stopping in bookstores and talking to people,” says Dee. “And we were so encouraged. The kind of people we were meeting, we thought this would be an industry we could feel comfortable in.”

The trip then became a search for a place they wanted to live that could also support a bookstore.

Neither Chuck nor Dee had been to Bellingham before, but they were staying with friends in Tacoma and took a short side trip to Victoria. They both have vivid memories of the return ferry ride that sunny September day, with the blue sky blazing and the mountain out to greet them. 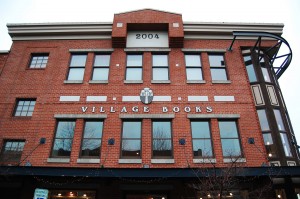 “We’d met a guy on our trip in the Black Hills of South Dakota who was from Mount Vernon who told us to go to the Oyster Bar if we were in that area,” says Chuck. “We made the reservation and had time to kill, so we drove up Chuckanut into Bellingham.”

“Coming from the south, that beautiful drive…” Dee says, trailing off, smiling.

“It was pretty terrific,” Chuck agrees. “We put it on our list of places to explore.”

Through research, the couple found that Bellingham made a very nice fit for a new, independent bookstore – and they particularly loved the feel of Fairhaven.

“We found that library usage was high,” Dee says of Bellingham and the surrounding communities. “And the university was here, which was one of our requirements. It was far enough away from a big city that it wasn’t a bedroom community – but close enough to have amenities,” Chuck says.

The decision was eventually made and the couple began the challenging search for space in Fairhaven. Though many buildings stood empty at the time, most were optioned by one person who wanted to sell it all as a whole to a Seattle developer, and there was no interest in renting to an upstart bookstore.

Gary Imus was running a gourmet cookware store at the time, in all of what is now Paper Dreams. He was cutting back and had divided his space in half.

“He was willing to rent to us,” says Dee, “and that’s where we started.”

The Beginning of Village Books & Its Part In The Community 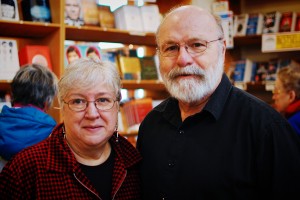 Chuck and Dee started on a shoestring, using recycled lumber to build bookshelves. Doors opened for business in June of 1980.

“The first years were really the go-go years for independent bookstores,” Chuck says. “We did 70 percent more our first year than what we had projected.”

As the business – and its space – grew, so did the couple’s involvement in their new community. Over the years, they have both been deeply involved in a huge array of organizations that benefit Fairhaven, Bellingham, Whatcom County, and beyond.

They’ve both been involved with and on the boards of numerous local organizations – the Fairhaven Association, Whatcom Community College’s Board of Trustees and Foundation, North Cascades Institute, City Club of Bellingham, Whatcom Literacy Council, and many, many more. Chuck is a founding member of Sustainable Connections and recently joined the board of the Whatcom Community Foundation.

“We’ve been involved in lots and lots of things,” Chuck says. “We feel really connected.”

“One of the awards we were given that I’m most proud of was in 2008, I think it was, we were named the Outstanding Philanthropic Small Business in the state of Washington. We were nominated by people here in Bellingham – the Literacy Council, with whom we’ve worked very closely over the years, Sustainable Connections, North Cascades Institute, and then the Community Foundation were all involved in that.”

That connection to so many other people, businesses, and organizations in the community has fulfilled the Robinsons – but perhaps more importantly, it’s helped innumerable organizations and events throughout the area. 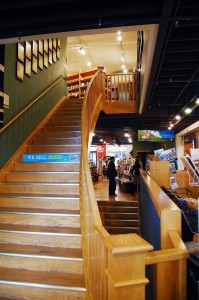 “A business like ours doesn’t generate so much in terms of cash, but obviously nonprofits thrive on money to run,” says Chuck. “We’re able to leverage our position in the community to raise money for them.”

For instance, when the Pickford Film Center was raising money for its new facility, Chuck and Dee helped by inviting Garrison Keillor to join them for a special Chuckanut Radio Hour. The event raised $10,000.

With the help of best-selling author Barbara Kingsolver, the bookstore was able to help raise $9,000 for North Cascades Institute.

“That’s not money we would otherwise have,” says Chuck, “but because we could get people to partner and do tickets for things, we’re able to raise funds.”

Changing – And Thriving – With The Times

It’s no secret that the bookselling industry has gone through massive changes in recent years. Independent stores seem to be closing at an alarming rate. And even many of the largest chain stores have caved under the weight of the online shopping and technological changes. Yet Village Books continues to succeed.

“The main key is we’ve been willing to change,” says Chuck. “A lot of people who closed their stores didn’t fail at their business, they just decided that that wasn’t the business they wanted to be in – they didn’t want to make those changes.”

So, while Village Books still offers that tactile, run your hands across the book spines experience that long-time book-lovers and bookstore-fans crave – and all set in an astounding, warm, inviting, three-story shop – customers can also order books and e-books online through the Village Books website.

Paper Dreams has also been vital to the bookstore’s continued success.

“Gifts is a bigger percentage of our sales, if we look at our two stores together,” says Dee. “Most of the bookstores that have thrived have increased the percentage of non-books that they’re selling in the stores, because there’s a much better margin.”

The couple’s decision back in 1982 to open Paper Dreams was, in hindsight, a particularly fortunate one.

“We were lucky,” Dee says. “It was an unintended consequence.”

Village Books and Paper Dreams now employ a staff of 37.

Working so closely together for all these years, Chuck and Dee are often asked by friends and customers if it’s difficult to run a business as a married couple. 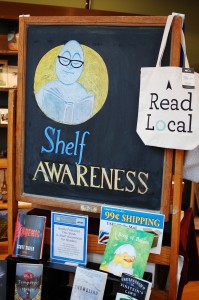 “People talk about separating their work life from their home life, but we’ve never tried to do that,” says Chuck. “I kind of think, well, you live one life and Village Books is just a part of ours.”

It’s a sentiment shared by book-lovers throughout Whatcom County. 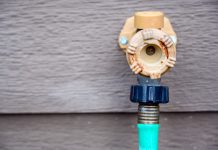