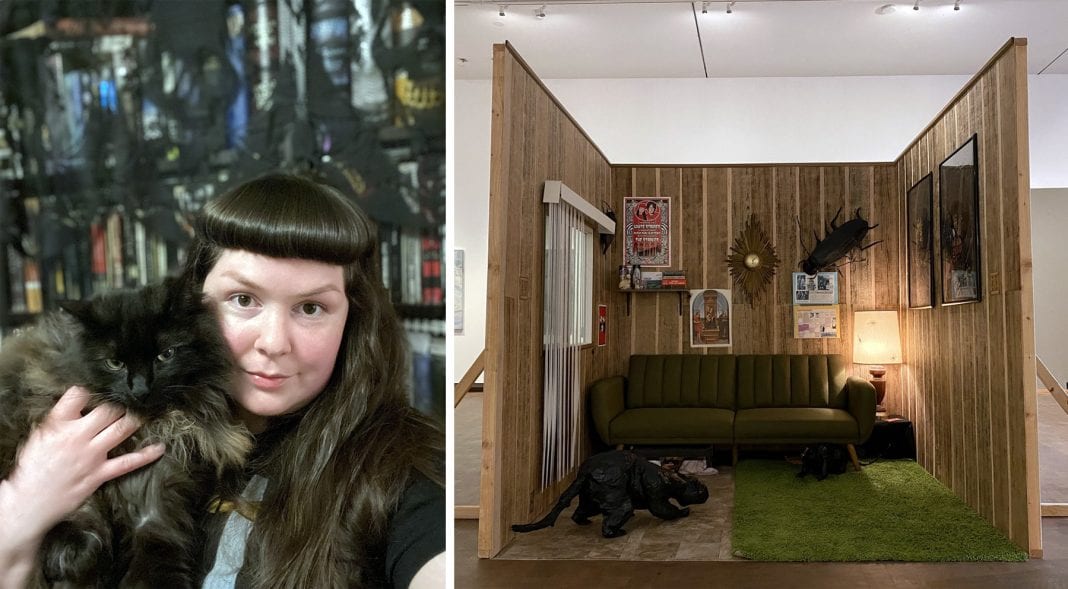 Bellingham resident Sarah Kindl creates a unique form of art, one that seeks to share her thoughts and feelings with the viewer by inviting them to literally step into environments she has built to convey her experiences.

Kindl lived in Southern California until her early teens, when life with her immediate family had become very stressful. She found a helping hand in the form of an aunt who brought her to live in Bellingham. “She had moved up maybe three years before, and told me that it was a great place to live,” Kindl says. “She wanted me around because we’re so close in age, and we were always really close before she moved.”

She brought with her a love of artistic expression, and it helped her to make the most of her new opportunity. “From a very young age I’ve gone to art as a form of therapy. Even before I knew what therapy was, I was feeling some sort of relief from making art,” says Kindl. As she grew older, it also helped keep her engaged in high school. “I had struggled with being in classes before—I would choose to stay home and do art. So it filled a personal need in my life, and motivated me to stay in school.”

The year after high school, she attended Western Washington University for a year, but found she needed some time to think things through before proceeding. “I took a break for about four or five years, trying to figure out whether I really wanted an arts degree, and to do art as a profession,” Kindl says. “I took some printmaking classes at Whatcom for a few years and really loved it. The way that it’s very process-oriented helped me a lot. Because it’s so methodical, you can kind of get lost in it, and it’s meditative.”

With a new perspective on her priorities, Kindl headed head back to Western to pursue a Bachelor of Fine Arts. Because there are a limited number of spots every year, there was no guarantee she would succeed, but she spent the next few years creating art that could be presented to WWU Art Department staff to earn herself a place in the BFA program. Once she was accepted, she created a work that tied together a number of her artistic passions.

One aspect was her love for creating an immersive atmosphere. “I’ve always liked the idea of being transported into a movie. When I’m seeing a film or experiencing an emotion, I’m having this very specific image, and I’m trying to show other people what that’s like for me by creating these environments,” Kindl says. “They can walk into it, and they can pretend to be a character in a film almost.”

A second element was Kindl’s rejection of what is seen as safe, or acceptable, in the art world in favor of directly connecting to the emotions and feelings common to all of us. “I think that we have this expectation of the artistic community or galleries—whatever art is in them has to be academic, and it has to speak about something that is very intellectual. And it’s not always like that,” she says. “I love humor, and disgust, and the way we use them to address painful things, or things that make us uncomfortable.”

Kindl also found that the life she left behind in California was still very much on her mind, and was rich with possibilities for interpretation.

“During my time at Western, I realized I wanted to recreate this iteration of my childhood home. I felt that if I made a big piece of art, that people could go into and experience, then it would convey this thing that I’ve been trying to explain to people for so long,” Kindl says. “It looked kind of like a set for a play, where there’s a stage and there are three walls instead of four. It looked like a living room in a trailer, but instead of wood paneling, I did relief printing of real wood paneling, and electrical outlets and light switches, and I had objects that I’d carried from California that were little mementos.”

The installation that earned Kindl her BFA was displayed in June of 2020, just after the COVID pandemic shut down social gatherings, including the audience she hoped would enter into the world she had constructed.

“Everything that you are making usually culminates in a big show at the Western Gallery, and it’s like a coming out show for artists,” Kindl explains. “You go into your community and meet people, and all of the people who have shops downtown come and see what these artists have made, and you do some networking. But because that didn’t happen, I feel like I’m in this weird limbo.”

As we draw closer to the end of the pandemic, Kindl looks forward to new opportunities to move forward and bring her expressive environments to audiences. “I really like doing mixed media with printmaking in mind, and that’s why this installation was so satisfying—I could mix printmaking with performative elements. I think that a lot of my art is still changing, and in the future I’d really like to convey the feelings and the experiences that I’ve had.”

Examples of her art can be viewed on her Instagram page, including her performances in the installation that earned her a BFA.