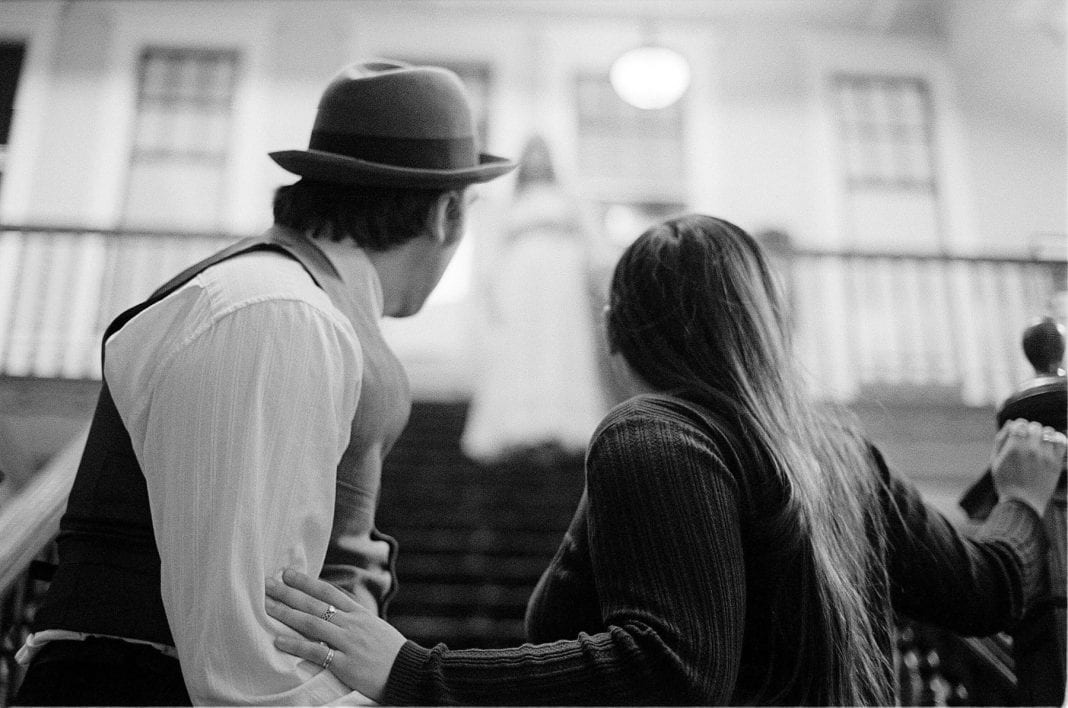 “They were a series of films in the 1930s starring Myrna Loy and William Powell, [that featured] this adorable detective couple unraveling mysteries,” says Sweeney. “We wanted to bring that cheery dynamic to it.”

Above all, the series’ format pays homage to classic radio dramas such as The Shadow and Suspense.

“It’s hard to even talk about radio dramas without mentioning some of the greats of the genre,” Sweeney says. “You learn so much about the medium by listening to the pacing and the tools that they use.”

“It wouldn’t be a show without our hardworking team putting it out there,” Sweeney says.

Bellingham Terror focuses on a new mystery each episode, connected through an overarching plot about citywide conspiracy.

“We have two peppy main characters—a kind of lethargic reporter for the Bellingham Herald and an overly cheery student at Western Normal School, as Western Washington University was known back then—digging into strange happenings in Whatcom County,” Sweeney says.

The team continues to accept auditions. Many local actors enliven recurring characters such as, according to Sweeney, “the editor at the local newspaper, the poor traumatized police officer, [and] the nefarious mayor who’s up to all sorts of shenanigans.”

“We try and create the sound effects in-house the way they would be produced back in the 1930s if this was a radio drama,” Sweeney says. “So, what is the sound of a tentacle wrapping around the side of a car? Well, funny story, it’s kind of like the sound of a bag of peas inside a bathtub.”

Bellingham Terror draws many of its mysteries from real incidents and legends. “Episode Three: The Fairhaven Phantom” concerns “the lady in the green dress,” a ghost fabled to appear at sunset in Fairhaven’s Sycamore Square (Mason Block) building. “Episode Seven: The Dweller in the Deep” discusses the infamous Blue Canyon Mine explosion from 1895. “Episode Nine: Winter Heat” explores the burning of Fairhaven High School (now Fairhaven Middle School) on New Year’s Day 1935.

“Almost every single episode includes real-life historical events, both in terms of the main plot, but also in terms of the dialogue—the subplots,” says Sweeney, who then describes one of his favorite scenes. “June and David, our main characters, are unwrapping a brand new board game, Monopoly, which had just begun to be generally available to the public in 1935.”

“What was Bellingham like in the 1930s?” Sweeney asks. “We weren’t quite the bustling college town we are today, but we certainly weren’t the frontier town we were in the 1890s. This was kind of Bellingham’s adolescence as we figured out what we wanted to be. I think [putting] on those shoes and jumping on the trolley down Railroad Street is part of the appeal.”

Sweeney sees “a huge untapped possibility” in bringing the radio drama format to podcasting, as Bellingham Terror does. Each episode has over 4,000 listens online from across the world.

“We had a big kickoff for season two with over 100 attendees,” Sweeney says. “And I hope that people keep enjoying it and keep learning new things about the community each and every day.”

The COVID-19 pandemic never interfered with writing and producing season two “because all we need is a microphone and a friend,” Sweeney says. In 2020, the Bellingham Terror team produced “James Wells and the Case of the Missing Belgian,” an adventure-mystery radio drama set in 1932 Ferndale for Whatcom Old Settlers Variety Show.

“This is a lost art form that we’re trying to bring back, revive, and revitalize,” Sweeney says. “So I think hearing that and experiencing that is part of the magic. After all, it’s theater of the mind.”

How Bellewood Farms’ Cider Gets From Its Trees to Your Glass