Home Activities WhatcomTalk’s Tony Moceri Takes You Along As He Paddleboards From Bloedel to... 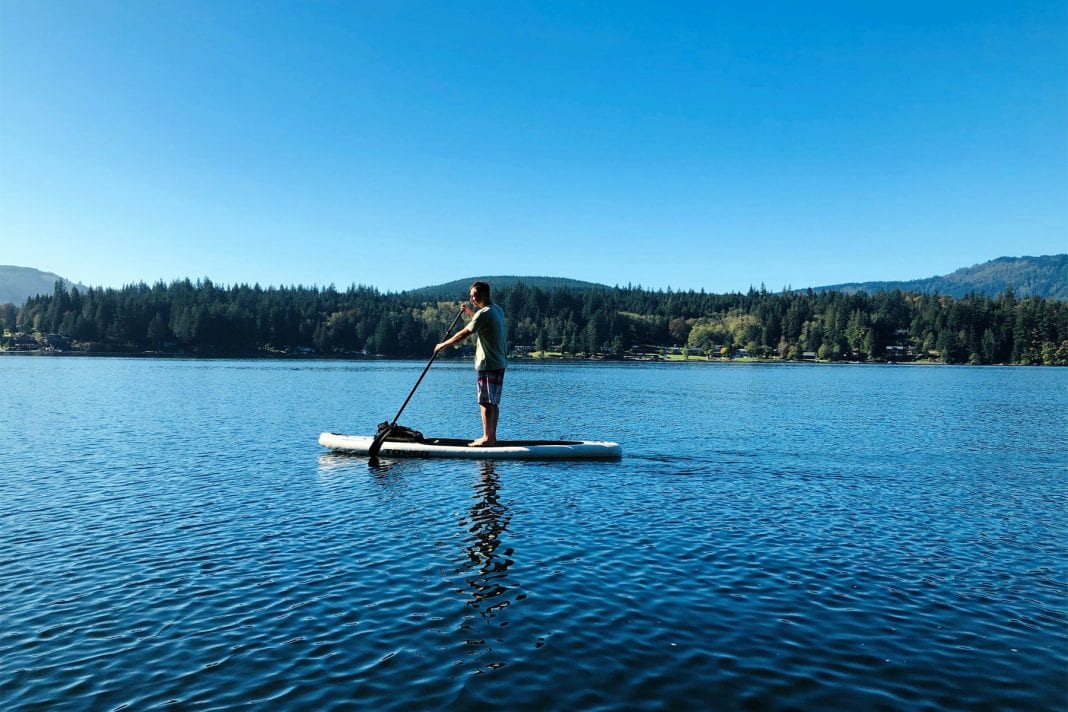 Lake Whatcom is one of many pieces of equipment that make up the outdoor playground that is Whatcom County. And as one of my favorite spots in which to play, it became the center of one of my 2020 goals: paddleboard from one end of the lake to the other.

In my mind, I was going to begin at Bloedel Donovan Park and effortlessly end in the ghost town of Blue Canyon. I made sure to regularly get out on my board to prepare for the approximately 10-mile trek, which I scheduled for August 5th. My plan was to start early in the morning while the lake was like glass, and if the wind picked up, I’d hopefully have a gentle tail wind to nudge me towards my finish.

I rose early on the morning of the 5th to meet my paddling partner and get on the water by 6:30 a.m. Approaching the lake, I noticed it was a bit choppy; the wind was blowing, so we’d be facing a head wind. We were a little concerned this would add time to our two- or three-hour paddle, but figured it was August and the lake would probably calm down.

We pumped up our boards, set them in the lake, and off we went. From the moment we hit the water, we were paddling at a strong clip just to make any progress. The chop tossed the boards around and the wind blew relentlessly in our faces.

It became quickly apparent that if things didn’t calm down, we were in real trouble. After about 45 minutes of paddling, we’d made it past Geneva—but it was all we could do to keep the boards going straight. The chop had become whitecaps that continually crashed over the noses of our boards.

After another 15 minutes of paddling with all our might, only to inch our way forward (while barely staying on our boards), we called off the trip. Our hour of paddling had garnered us a little over a mile of distance, which we quickly retraced in 15 minutes to land back at the park. Upon returning, we learned a small craft advisory warning was in effect, and had no business being on the water.

Discouraged, but not defeated, we rolled up our boards and planned to try again another day.

For our second attempt, we watched the weather and choose a day forecasted as calm and safe for a couple of paddleboards to be on the lake. We hit the lake again on September 4th, a beautiful, calm day that provided excellent conditions for paddling.

As we headed up the lake and out of basin one—the shallowest and smallest of the three basins—I looked towards Squalicum Mountain to my left as I pointed my board towards Strawberry Point.

Relieved that this paddle was offering less excitement than our previous outing, I thought about the history of the lake.

A hundred years ago, Lake Whatcom—now used for recreation—was a highway transporting people, timber, and coal. Boats navigated back and forth taking people south who were homesteading the Mount Baker foothills, and hauling logs north, which eventually made their way to Bellingham Bay to be loaded on ships. Coal, mined above Blue Canyon, was loaded on rail cars and hauled away. The images of this busy throughfare were hard to imagine as I calmly moved my board through the water.

Passing Sudden Valley on my right and Stewart Mountain to my left, I spotted Reveille Island up ahead, a sign I was now well into the third basin. This is the largest—and deepest—part of the lake, reaching over three hundred feet deep in some spots.

With aching feet and a tired back, I passed the island and pointed toward the North Lake Whatcom Trail (also known as the Hertz Trail). I then paralleled this three-mile trail, which goes along the old railway grade. From the water, I spotted runners and bikers enjoying the trail. Reaching the end of the trail on my left, I then passed South Bay to my right and could see Blue Canyon straight ahead.

Approaching my destination, reminders of Blue Canyon’s bustling past also came to mind. Old cabins remain, scattered amongst the new homes that regularly rise up along the shore. Pilings tired with age dot the coves, while the abandoned train trestle stands above the lake.

Now quiet, Blue Canyon—with the coal mine above and transportation hub below—was once home to a thousand residents. This is where I pulled out my board, squeezed out the air, and gave some final thoughts to all the stories this lake must hold.

With the season’s goal now successfully completed, I sat with tired legs and enjoyed the thought that I now shared this completed route with so many who had come before.