This artistic duo met as student employees and graphic designers at Western Washington University’s Associated Students Publicity Center. With desks positioned next to one another, they collaborated on projects, often leaning over to ask for a second opinion. Their work built a friendship and appreciation for each other’s individual design styles.

In 2018, a professor shared the City of Bellingham’s call for art for the pillars in the Commercial Street Alleyway under the public parking garage. The goal? To make the alleyway a little friendlier. Barrett and Shaffer put their heads together to propose two designs in hopes that one might be chosen.

The canvas was certainly unique—14 pillars to be painted as an anamorphic illusion, requiring viewers to be positioned at a particular vantage point to recognize the image. Barrett and Shaffer’s design of a brightly colored palindrome, titled “Never Odd or Even,” was chosen, and the two got to work.

Shaffer and Barrett have both been artists since they were young, but hadn’t expressed art on large scales, like the murals on which they now collaborate.

Barrett, 23, grew up in Marysville and moved to Bellingham to major in studio art with printmaking; she got a minor in graphic design and now works as a graphic designer for a California-based toy company, but has stayed in Bellingham. While in college, Barrett had the opportunity to work with a local printmaker, Runaway Press. The work she did there incorporated “lots of little pieces to work towards something bigger,” which stirred her desire to work on a large-scale project, like a mural.

Originally from Denver, Colorado, Shaffer, 24, grew up wanting to do concept art and animation, and landed in Bellingham to major in graphic design at Western. She now works as a graphic designer for GLDN, based in Bellingham and La Conner. When Shaffer was in college, her bedroom walls were painted over and over again as practice canvases for large-scale mural work. “Working on murals is so cool because it’s so public,” she says. “You have to pay a lot of attention to detail…it’s like a big puzzle to solve.”

The first column mural the duo worked on took around three weeks to complete. They would wake up early to work on the project, and then head straight to work afterwards, oftentimes still in paint-coated clothing. As the anamorphic project was their first large-scale public mural, they encountered challenges that became opportunities to build skills and adaptability, which helped on their second shared mural assignment. The first project was completed in May of 2019.

Later that same year, in September, the City of Bellingham and the Downtown Bellingham Partnership announced another call for art, in the same alleyway. This venture would transform the 100-foot blank wall into an energetic, modern celebration of downtown Bellingham and serve as a photo opportunity for locals and visitors.

Again, a design by Shaffer and Barrett was chosen, and the two returned to the alleyway they’d brightened up a year prior to create their second mural. This time, however, they had a lift instead of ladders, and recruited helpers to paint small sections.

Barrett says they had a lot of freedom with the second mural and were inspired by a retro look, incorporating flat shapes and lots of color into the design. They also highlighted key downtown architecture, such as the Whatcom Museum, Depot Market Square, and the Herald Building.

“We complement each other’s strengths and weaknesses really well,” Shaffer says of collaborating with Barrett. “And with murals, once you have the design, it’s nice to have more people working on it.”

They invited friends to contribute to aspects of this second mural, such as helping set up the grid on the wall to trace the design or fill in particular sections, advised by Barrett and Shaffer. “It’s nice to see how invested people get,” says Barrett. “People are really proud of the work they did, even if they don’t consider themselves artists.”

The mural was completed in June of 2020, and Barrett and Shaffer agree it’s been wonderful to see people enjoy it, as pictures are posted online and they witness pedestrians stopping to admire and take photos in front of it. “Right as we finished, there were little kids that ran over to take pictures in front of it,” Barrett says. “It’s fun to see something that you made that everyone has access to.”

After successfully creating that first pillar art project together, the duo added an artistic bucket list item to do a flat wall mural, which they’ve now completed. Their next goal? An indoor piece for a small business or a restaurant.

Barrett and Shaffer’s work can be seen downtown,and on their Instagram feeds at @annabellebarrettart and @shaffeh. 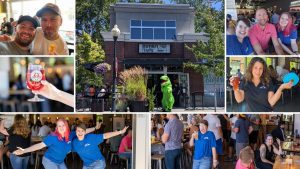