The local bookstore is a place people visit to be inspired and seek connections: with language, with themselves, and with their community. For thousands of people locally over the last 39 years, that place has been Village Books.

For the last nine years, the U.S. has seen net growth in the number of independent bookstores. And it’s true what they say: shopping local really does matter. People are becoming more aware of how locally spent dollars help their community. In fact, 28 percent of independent bookstore revenue immediate recirculates into the local economy.

In addition to economic benefit, there’s also the personal one. Walking into a local bookstore, says Fairhaven manager Lauren Sommer, provides a sense of interaction and exploration that is far superior to any online shopping algorithm.

“Anyone who walks into the store can find something that speaks to them,” she says. “You can talk to a staff member and get a recommendation for something you’ve maybe never heard of. And you might pass that along to your friend or family member, and continue the chain of passion for reading and discovering new things.”

Sarah Hutton, who co-owns Village Books with Paul Hanson and Kelly Evert, says there are about 50 staff members between the Fairhaven and Lynden locations. Their pride and expertise, she says, have been vital to making the business a long-lasting success.

The other thing that’s made Village Books successful is their outstanding community involvement. They
partner with Whatcom Community College for several events, including the Chuckanut
Writers Conference and WCC’s Community and Continuing Education program, which features writing classes year-round from Chuckanut Writers. Additionally, they partner with all the public and academic libraries in Bellingham and Whatcom County for the county-wide Whatcom READSprogram.

At Western Washington University, Village Books is part of the annual Children’s Literature Conference held each February. They also support the Whatcom Literacy Council through their Annual Trivia Bee in the spring and the Literacy Breakfast with Nancy Pearl in the fall. To top it off, each quarter their Round It Up program raises money and awareness for different local non-profit. This season’s recipient is Pass the Hat.

“They’re invested in our success, just like we’re invested in theirs,” says Village Books co-owner Paul Hanson, of community partnerships. “That’s one of the special things about Bellingham: that synergy between all of these organizations. We realize that all these waters rise together. The more we work together, the more successful we are. It’s truly collaborative.”

“Being able to help local artists, local authors; all those people who would not normally have a way to show their art,” she says. “I’m glad we’re able to do that for them.”

For ultimate Village Books fans, there’s the bookstore’s Passport Program. For $30, customers receive a whimsical passport requiring them to complete certain Village Books experiences for prizes and eventual induction in the League of Extraordinary Readers.

Both Village Books locations will have scavenger hunts, and those who finish them will be entered into prize raffles. Items exclusive to Independent Bookstore Day will also be for sale, including signed books. These can only be had in-store on this special day!

In addition, Harry Potter’s Professor Trelawny will read fortunes from 1:00 p.m. to 3:00 p.m. Exclusive to Fairhaven is “The Bookseller Is In” booth – featuring a beloved sage to recommend your next read – as well as a pet photo station. Over the years, Village Books has welcomed a variety of animals inside, including dogs, cats, parrots, ponies, pigs, and even a hedgehog.

At 4:00 p.m. in Lynden, Bellingham writer Candace Wellman, author of “Interwoven Lives: Indigenous Mothers of Salish Coast Communities,” will speak. At 7:00 p.m. in Fairhaven, another Literature Live event will feature local poets Sierra Golden (“The Slow Art”) and Elaina Ellis (“Write about an Empty Birdcage”). April is also National Poetry Month, so poetry books are 20 percent off. And last but not least, Independent Bookstore Day will have plenty of treats to snack on.

“It’s literally a party,” says co-owner Sarah Hutton. “It’s a fun celebration of our customers, our staff, our store. We’re just excited to celebrate that we’re here and that we’re thriving.” 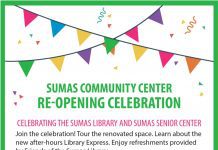