The first time she stepped onto the ice she was three-years-old. Tina Mauler recalls a photo from her childhood; she’s standing on an outdoor rink in Salzburg, Austria holding figure skates over her shoulder as her father stands next to her. The photograph is the beginning of a storied career in the figure skating world, over many years spanning multiple countries.

Born in Salzburg, Tina’s younger years consisted of bouncing back and forth between North America and Europe. Although the continent she called home would change, one thing remained the same: skating. It was her constant, her home away from home. All emotions, happy or sad, could be actualized on the ice.

Post-World War II Austria wasn’t an easy place to live, especially for a single mom. Tina’s mother was 24-years-old when she made the decision to relocate the family to Whitehorse, Yukon Territory, Canada. She had sent immigration paperwork to both Canada and the United States, and eventually the Canadians gave the family an opportunity to move to the newly-incorporated city of Whitehorse. The next step was getting there.

Five-year-old Tina, her mother and grandparents packed up as many things as they could carry and began the voyage to the subarctic climate of the Yukon Territory. First step: get to the Atlantic Ocean. The family took a train from Austria to France, and then boarded a ship bound for the East Coast of Canada. Once arriving in Halifax, Nova Scotia, they took a train across the whole country to get to their new home.

From ages 5 to 12, Tina lived in Whitehorse. Like her previous home of Salzburg, this area proved a breeding ground for her continued love of skating. She recalls the winters as frigid, but full of fun – full of skating.

Every winter, parents and teachers set up boards behind their schoolhouse and flooded the area to make a small ice rink. Students were out on the ice as much as possible, skating or playing hockey.

Tina and the other girls didn’t associate with the hockey players if they could help it. “Those boys would try and shoot slap shots at us, and those hurt if they hit. So we’d only hang out with them occasionally in case the goalie was cute,” she says with a smile.

In those early years, Tina found solace on the ice. And living in a near-permanent winter wonderland only furthered her interest in skating. At 13, her move back to Austria would build her foundation as a competitive skater, and see her become a champion.

As her teenage years progressed, Tina grew as a skater, becoming the Salzburg State Champion four years in a row. She competed in cities throughout Germany and Austria, including the Austrian capital of Vienna.

“Vienna is the big hub for skating in Austria,” Tina says. “One year at Junior Nationals I had perhaps my most memorable moment in skating, but not for the best reasons.”

Vienna is known for their pristine outdoor rinks, and Tina was excited to skate them. But she wasn’t prepared for the strong gust of wind that would move her the opposite way during one of her figures. As she was about to complete the figure, a cool blast of wind pushed her backwards causing her to completely stop. Her opposite foot touched the ice. She pleaded with the judges to not take away points for the unfortunate circumstance. Today Tina emphasizes the importance of completing meticulous figures, and teaches her Bellingham students to focus on finishing them properly.

Her foray into coaching began in the late 1960s, when she coached two years in Austria and Germany. In the 1970s, she moved back to Canada and found herself coaching again. After moving to Vancouver, British Columbia, she began coaching in the Lower Mainland and Vancouver areas.

It wasn’t until 1984 that Tina immigrated to the United States. After meeting her husband, who’s from Bellingham, they moved to Ferndale. She’s lived there since.

In 1993, things changed for the Bellingham skating community; Tina got involved and didn’t look back. She’s helped foster the program into what it is today.

One of the founders of the Bellingham Figure Skating Club (BFSC), Tina remembers when they started skating at the old ice arena located next to the Bellingham airport. “It was a great arena,” she says. “We used it for skating in the winter and during the summer it was home to the circus when it came to town.”

This September, Tina celebrates her 25th anniversary with the BFSC. She has no plans of letting up, although she has relaxed a bit. Her main coaching and teaching years were from 1995 to 2012, when you could find her coaching five to six days a week, getting up as early as 5:00 a.m. to train competitive skaters.

Currently, she teaches Learn-to-Skate classes for the Bellingham Sportsplex Skating Academy and has a much smaller, but dedicated roster of private students of all ages. Tina has worked with skaters as young as two and a half, and as old as 86.

Scott Orvik is one of those students. Tina started working with Scott when he and his family moved to Bellingham from Alaska. Despite Scott’s autism, he has a tremendous passion for skating. Under Tina’s tutelage, he has become an incredible figure skater, performing spins, jumps and spirals in competitions.

“Although I’ve scaled back on my many early mornings, if students are motivated and parents willing to get up early and bring them to the rink for lessons, it’s still hard for me to say no to teaching and coaching,” Tina says.

If you want to see Tina’s skaters in action, check out the BFSC Christmas Show on Saturday December 8 at the Bellingham Sportsplex. 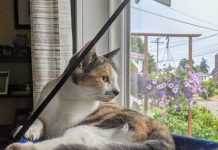 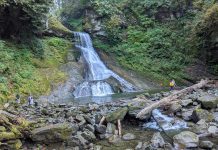