I’m not one for lavishing my girls with gifts. They are lucky to have grandparents that provide them with an abundance of toys and games. Once in a while, however, I bring home a little something that I think would delight them. Sometimes I really hit the mark. A recent Friday was one of those times.

I brought home these little magnetic turtles made out of seashells. One has pink eyes, one blue—a nod to each of my girl’s preferred colors. The turtles both have ladybugs perched on their backs and tiny, spiral-shelled tails. For me, these are carefully crafted works of art. For my little girls, they are pets. They played with their “little baby turtles” all afternoon that day. They didn’t even fight, which was a gift for me.

These creations were not found at a gift shop or the mall or Amazon. They came directly from their creator Leroy Carlson, or “The Turtle Man,” as many people in Whatcom County have come to know him. Leroy and his wife Ann are high-profile Bellingham residents. Three or four times a week they walk at Boulevard Park and they frequent area music events. (They were emphatic when telling me they never miss a performance by their favorite musician, JP Falcon Grady.)

Whether strolling in the park or sitting at a concert, Leroy wears his trademark shell-turtle-covered cap and carries a little zippered pouch of magnetic tins filled with more of his work. He is a walking gift shop. He sells the turtles for $5 each and he has buzzards, whose heads are made with small, hard-to-find crab claws, for $10 apiece. Many people who attend the same shows or make daily visits to Boulevard Park already have one, or many, of the trinkets. But he generally sells at least one at any given event. Over the last three years, Leroy has made $12,000. And he has given every cent to charity.

I met with Leroy at his home so that I could see his works in progress and talk with him about his philanthropic hobby. Leroy immediately put on his hat for me and pulled out dozens of finished turtles and buzzards. I asked him if I could see where he works and as we made our way downstairs he toured me around the walls of photographs of his children and grandchildren, telling me a little bit about each of them. He is the very proud father of four grown children. At the base of the stairs in the former bedroom of one of his sons is a room brimming with stacks of styrofoam and plastic trays filled with innumerable seashells of all shapes, sizes and colors. He finds them on beaches along the Washington coast, but this amassed quantity is due also to donations from the many people around Bellingham who know “The Turtle Man.”

When I asked him why he does this, Leroy’s answer came in the form of a family history. He started by saying, “My grandma and grandpa were uneducated, never went to school. They raised my brother and I. And when we were growing up I never ever had a new bicycle … My grandpa mowed lawns, cut wood … he never went to school and he couldn’t get a good paying job. In 1940 we were really struggling.”

Leroy was 10 years old in 1940 and that was the year that one of his grandfather’s lawn-mowing clients offered him a job operating an 85-acre dairy farm on the Sand Road. It would pay $30 a month. But it was more than just a steady income. This offer meant a house to live in, milk from the cows, eggs from the chickens and vegetables from the garden. Leroy’s grandfather took the offer. This recognition of hard work and act of kindness gave the family the start they needed. Only a couple of years later, their circumstances far improved, Leroy’s grandfather was able to find a good-paying job in Bellingham and the family was able to buy a house of their own.

This is only a fraction of Leroy’s story. He started from humble, sad origins. But he was cared for and, like his grandfather, he grew up embracing hard work. After retiring from GP 25 years ago, his travels took him all along the Washington coast where he, naturally, collected shells. His wife urged him to make something of the countless shells piling up in their spare rooms. Hence, the turtles. As Leroy puts it, “I made a hobby that I enjoy.” And as I see it, he is turning his hobby into money to help families currently struggling as his once did. Most of the money he raises goes to the Bellingham Food Bank. He has also given to cancer research and to combat tuberculosis, which took his mother at age 27. He tells me that whenever someone buys a turtle he lets them specify a charity if they would like. Otherwise, he decides.

I did not meet Leroy out and about in Bellingham. He came to my attention through Keith Coleman, Whatcom native and general manager of Bellingham SpringHill Suites. Keith met Leroy at the recent Ferndale Street Festival he attended with his husband and WhatcomTalk’s own Kevin Coleman. He realized that Leroy is the embodiment of SpringHill Suites’ commitment to art and giving back to the community, which is why Keith extended an invitation to Leroy to participate in SpringHill’s 4th annual ArtNite event on Friday, October 20 . At least a dozen local artists will be on hand showing, selling and creating art. I called up Leroy to ask him if he is going to participate. He said, “Yes, I think I’d like to do that. You know, I like to advertise so people will come and buy them.”

I’ll be there too. And I’ll give my daughters each $5 to pick out another “baby turtle.”

I urge you to come to this event and meet Leroy, buy one of his turtles and ask him not just how he makes them, but why. His story is sure to inspire.

SpringHill Suites by Marriott Bellingham is located at 4040 Northwest Avenue in Bellingham. For more information visit Springhillbellingham.com or call 360-714-9600.

Nature Is the Bee’s Knees 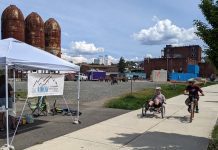 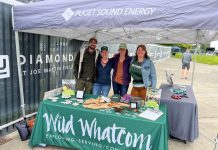