Like many Bellinghamsters, I first came across Ken Wilcox’s “Hiking Whatcom County” guide at Village Books. Signed copies were on display, complete with the bookstore’s signature handwritten recommendation hanging below. The 5th edition of the book, published in 2006, has accompanied me on many hikes throughout the county ever since. From Lookout Mountain to Racehorse Falls, Ken covers dozens of lesser-known trails in his guide, making it invaluable to any Whatcom hiker. And after 10 years, “Hiking Whatcom County” is getting a long-anticipated overhaul.

After moving to Bellingham in the early 1980s to attend Western Washington University, Ken began hiking extensively throughout the county. He never dreamt of writing a hiking guide. Then one day, a coworker suggested it. “You should write a book. You know all of these places, why don’t you write a book?”

Nearly 30 years later, “Hiking Whatcom County” is going into its 6th edition. Expanded and completely rewritten, the guide contains 125 trails from the Cascades to the coast. “I totally rewrote the book and tried to use as many new photos and maps as I could,” Ken explains. This new edition will be released May 27, 2016, at a Village Books author event, kicking off Ski to Sea weekend.

Researching and writing a local guidebook is an ambitious undertaking; even more so for someone who lives across the country. Ken relocated to Alexandria, Virgina for work five years ago — which is perhaps the chief reason why “Hiking Whatcom County” hasn’t been updated in a decade. However, Ken visits Whatcom County often. “Every time I’m out there I’d be out hiking around, taking photos and taking notes,” Ken shares. “Wish I could have spent more time up in the North Cascades. There are still a couple hikes up there that I haven’t been on for awhile.”

For those elusive North Cascade trails that Ken wasn’t able to reach, he turned to local friends, the US Forest Service, and other land managers for the most up-to-date information. One such trail — Little Jack Mountain — is among Ken’s favorites. “It’s all south facing, and it’s got these really big meadows up high so it tends to flower earlier than a lot of the high country. It’s a nice way to go when you get warm weather in early summer. In June, it feels like August,” Ken says.

Hannegan Peak is another of Ken’s favorite high country, wildflower-strewn trails in Whatcom County. Its favorable features include excellent views from 6,200 feet — a “sea of mountains” in Ken’s words — and minimal crowds. Ken shares, “I’ve never been up there when it’s been at all crowded. You’ll run into people, but not like going to Table Mountain.”

As an outdoor recreation planner, Ken was hired by Whatcom County Parks to develop a trail plan for the Chuckanuts in the mid-1990s. He played an important part in the eventual creation of many trails, including the Rock Trail. Ken explains, “One of the priorities was to connect the overlook up on top of Cleator Road down to Lost Lake. And we had kind of stumbled on this corridor that was really beautiful.” The plan was finalized in 1996. However, another decade passed before the Rock Trail’s construction started rolling.

Ken explains, “I finally approached the state parks manager about building this trail as a volunteer project. So it was sometime in 2010 that we had it flagged, and took the manager and his staff and walked the corridor to show them what we had in mind.” The manager was sold, and Ken got the green light to start building the Rock Trail. Unfortunately, he also received a great job offer in Washington DC around the same time, prompting him to move east. But that didn’t stop Ken from continuing his work here in Whatcom County.

“I was out there a lot, so I thought well heck, I’m gonna do it. I’ll just take some vacation days, we’ll schedule work parties whenever I can come out there. So it took like two years,” Ken says. He took the lead on building the Rock Trail’s upper half, while the Washington Trails Association — with a volunteer crew led by Arlen Bogaards — built the lower half. Ken gives credit where it’s due. “We had lots of volunteers from the Mount Baker Club and Bellingham Mountaineers. REI gave us a grant to pay for all that lumber for the stairs,” Ken says. Today, the Rock Trail is arguably one of the finest trails in Larrabee State Park.

When asked what he most enjoys about his work, Ken’s answer is simple. “Field work,” Ken replies. “Getting out there and being on the trail. When you’re consulting or writing, you’re spending a lot of time in front of the computer and that can get old sometimes. But field work is pretty hard to beat.”

Join Ken May 27, 2016, at Village Books for the release of his new book, “Hiking Whatcom County, 6th Edition.” Happy trails! 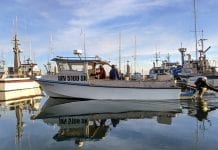 A Day in the Life of a Puget Sound Crabber, Fourth-Generation Whatcom Fisherman Kaegan Gudmundson 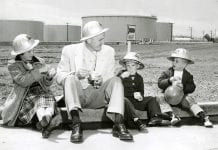 Thanks To the Pioneers of ’54, Phillips 66 Celebrates 66 Years in Ferndale 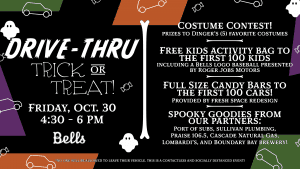 Beginning this October! Dance the rest of 2020 away. For the first time in 5 years, Arthur Murray trained and certified dance instructor Charles Crooks is offering private ballroom/Latin/swing dance lessons at the beautiful Love[...]
View Calendar