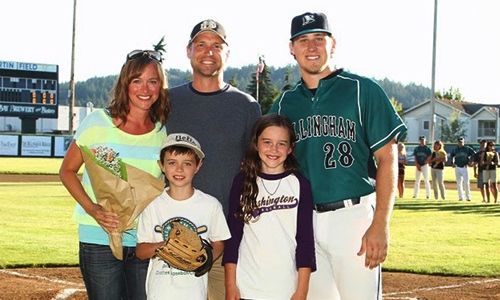 Hey, have you heard? The Bellingham Bells are having a pretty magical season: a 14-game winning streak, an impressive win/loss ratio, and record crowds at Joe Martin Field.

One thing many fans don’t know is that local families volunteer spare rooms in their homes for the team’s college-age baseball players — welcoming these young men into their families while the players work hard to bring exciting West Coast League baseball to Whatcom County crowds.

They knew it had been a positive experience for their friends – and that the team didn’t have enough families for all of this year’s players.

“We have the space in our basement, so it just made sense to open our home,” says Heidi Carpenter.

“It’s fun to get to know the players and go to a lot of baseball games,” Carpenter continues. “The hard part is the player’s schedule; they’re gone a lot, or sleeping late, so we don’t get a ton of quality time with him. On the flip side, we can go about our routine pretty normally.”

Carpenter says it feels good to open their home to a Bells player and they plan to do it again.

For baseball fans Kelly and Todd Fisher, it just made sense to become a Bells host family last year – they’ve opened their home to people through their church for many years. Todd learned about the need while talking to Bellingham Bells owner Eddie Poplawski at a game a couple years ago.

“It is kind of weird,” Kelly Fisher admits, with a laugh. “But for these guys, it’s even weirder, because they’ve never been to Bellingham. You pick them up off the bus and then take them to your house and you’re like, ‘Welcome home!’”

“Staying with a family that I’d never met was weird to think about before I arrived in Bellingham,” says Nate Cole. “But after arriving at the Fishers’ house, I immediately felt at home.”

Cole, the third of four kids, says he liked playing the role of big brother to Avery and Ben, the Fishers’ children.

“I miss having Nerf gun wars and wrestling matches in the basement,” he says, laughing.

For Gabe Cramer, the same bond quickly began to form as soon as he stepped into the Fishers’ home.

“When I arrived at the house, the kids immediately bombarded me with questions, tasks, and an extended period of show and tell,” he says. “There was no time for any awkwardness – nor really any reason for it.”

Cramer says that because Ben and Avery were so comfortable around him from the get-go, he instantly felt like a welcome addition to the house.

“Kelly and Todd have been extraordinarily generous and make living with them a breeze,” he says.

The players stay busy with practices and games, as well as building friendships with new teammates, so host families don’t always see a lot of them during their summer stay.

“They’re here for about two months, and they’re really only home about 50 percent of that time,” says Fisher.

A typical day during a homestand finds players sleeping in late, grabbing lunch and hanging out a bit before hitting Joe Martin Field at 3:00 p.m. for pre-game practice, and then taking the field to play at 7:00 p.m.

The Fishers’ grocery bill doesn’t necessarily take the huge hit one might expect, what with all the sleeping in well past breakfast and being fed before each game by the Bells organization.

“Honestly, you feed them lunch – which they pull together – and a lot of snacks,” Fisher says, laughing.

Having said that, it’s not unheard of for Fisher to come home and find four players eating lunch around her kitchen table.

“It’s not a huge food commitment – unless you find four of them eating at your house at once; then your fridge gets cleared pretty quick,” she says, laughing again.

The Fisher family has kept in touch with Nate Cole and expects to do the same with Cramer.

“We still text Nate,” Fisher says, “and the kids still email him and his girlfriend. We all check in with him. It just extends your family a little bit.”

Cole clearly feels the same. “I’d love to visit the Fishers sometime in the future,” he says. “They’re a truly special family who made me feel right at home during my stay in Bellingham. It’s a summer I’ll never forget.”

Cramer already knows he’ll stay in touch. “I will most definitely remain in contact with them once the summer has ended,” Cramer says. “This just feels like one of those special relationships that you hold onto for a long time.”

Bellingham Bells host families receive free season tickets, as well as a discount on all Bells merchandise. This year they’ve also been treated to a night at the Upfront, Ryan Stiles’ improv theatre. 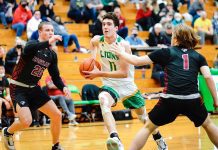 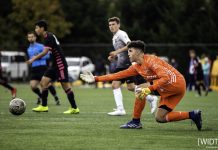