Home Everyday Not Just For Dads: Give a Listen to the Whatcom Dads Podcast 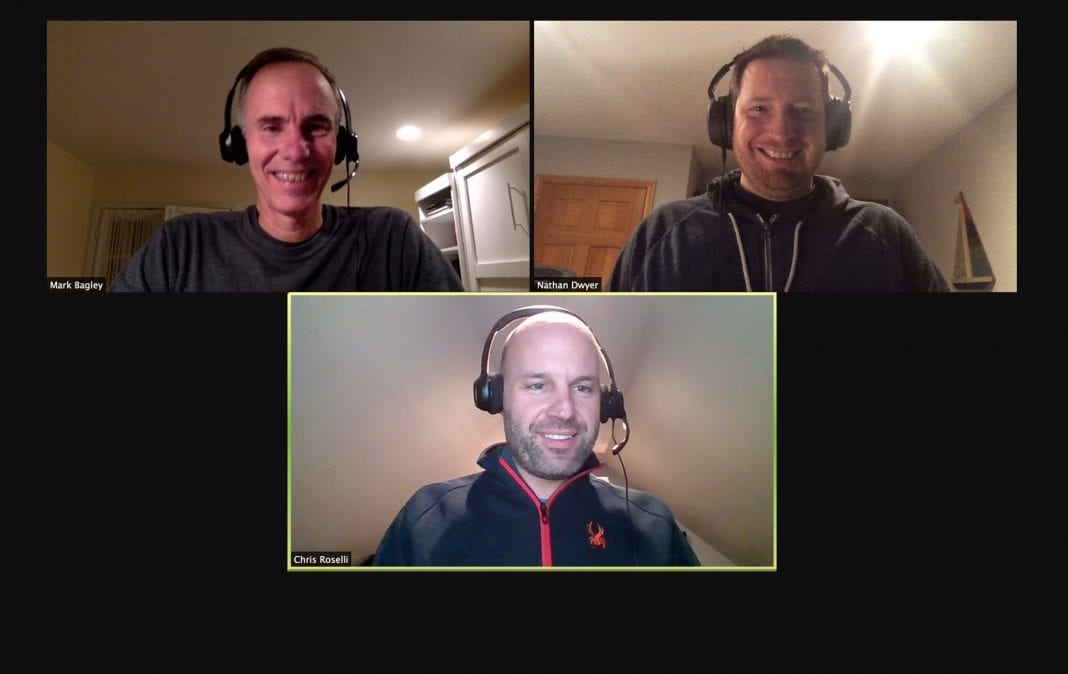 Three Whatcom County friends—fathers to children ranging from toddler age into their twenties—chat once a week to share parenting anecdotes, tips, trials and successes. And we all get to listen in.

Launched in October 2020, Whatcom Dads Podcast is the brainchild of Bellingham attorney Nathan Dwyer, who recruited two pals—Mark Bagley and Chris Roselli— to record open, honest conversations about their parenting experiences—the good, the bad and the funny.

Like so many others over the last few years, Nathan began listening to podcasts while exercising, driving or puttering around the house or yard. He began to think about creating one of his own.

“It became this several-year journey of thinking about what it could be and things that I know,” he says. “ I could do a sports podcast, but there are a million people doing that.”

Nathan and his wife, Amanda, are parents to three younger children. Amanda has been active with Bellingham Technical College parenting classes, and Nathan had attended a class for dads. “I realized: Wait a minute, there’s might be a little gap here,” he says. “Dads don’t necessarily have a place to get tips on information and parenting.”

He kicked the idea around with Mark, a father to two in their 20s, and Chris, father to a tween and a teen. The trio decided to give it a go.

“That was in October,” Nathan says, “and here we are.”

The first episode dropped in early November; at the time of this writing, the partners-in-podcasting have produced 13 episodes, including one helmed solely by their wives.

Speaking of wives: though it’s named the Whatcom Dads Podcast, any parent can find plenty to glean from Nathan, Chris and Mark’s stories. In fact, anyone who spends time with children should give the pod a listen.

It can take time for a new podcast to find solid footing; you might hear audio issues or awkward pauses. Not the case with Whatcom Dads Podcast. From the start, each episode has been organized, recorded and edited seamlessly, and is built around regular segments, such as interviews with experts and recommendations for kids. It’s clear that the team had a plan before jumping in.

“Let me clarify,” Chris says, with a laugh. “Nathan has a plan. Nathan does all of this; Mark and I just show up and make editing really hard for him.”

“You guys should give yourselves a little more credit,” Nathan interjects. “You talk to your wives about the topics beforehand and make notes and think about funny things that have happened.”

Launched during the pandemic, the friends Zoom every Sunday night for the following Friday’s podcast episode release. It’s clear from first listen that they share history and chemistry.

“It’s great fun being able to talk to these guys on a regular basis,” says Mark. “We know each other well, we complement each other well, and I think we have similar senses of humor. And Nathan sets up great bumpers for us that we can crash into but not go off the road, which makes it really easy. It wouldn’t be successful without all the work and organization Nathan puts into it.”

Weekly interview guests are local and wide-ranging in their areas of expertise, from a parent educator, police officer, retired fire chief, college admissions director, personal finance teacher, and many more.

Mark and Chris—who both work at Western Washington University—have deep contacts throughout the community. “No one’s said no yet,” Nathan says with a laugh. “But we’re getting to the point where I have a list of people we’d like to bring on. Our connections are going to run out in the next few months and I’ve been pushing for listeners to send in suggestions.”

(Feel free to email suggestions to whatcomdadspodcast@gmail.com or send a message through their Facebook page.)

“We hear the same thing from all the experts who come on,” says Chris. “They say: ‘Thank you for doing this. There’s really not something like this for dads.’”

It’s clear that Nathan, Chris and Mark are having fun with this project.

“Nathan checks in with us regularly,” Chris says. “He’s made it clear that the moment this becomes a job and we’re not having fun, the podcast ends. And we’re having a ton of fun, so I don’t see this ending anytime in the near future.”

All three agree that the best part of the pod is that they have 90 dedicated minutes every week to spend with each other, even though it’s on Zoom.

“We laugh a ton,” says Chris. “I also really respect them as fathers, so to get their perspective on things— whether it’s Nathan talking about what he’s doing now [with little ones] or Mark, who has raised two incredible kids—they’re guiding lights.”

The hardest part of podcasting?

“Just carving out time and making sure this hobby project doesn’t take away from other responsibilities,” says Nathan, who edits episodes after the kids go to bed. “I don’t want to take away from family time and my job. But the editing is getting easier and taking less time; I’m getting in a rhythm.”

Mark interjects with his most difficult podcast-related task: “Our topic for next week is to talk about music we listen to with our kids,” he says. “That was 20 years ago for me—I have no idea what we were listening to!”

“It’s hard for me to think back,” he continues. “The most fun thing is talking to [my wife] Annette beforehand or afterward and just thinking of funny stories that happened to us. It brings up such good memories.”

“If we have fun and one person listens, it’s accomplished its goal,” says Nathan. “Luckily, 80 people or so a week are listening, and that’s all a bonus.”

Another underlying goal for these dads is to not put too much polish on their parenting experiences. Let’s face it: parenting is hard and no one gets it right all the time. Nathan, Chris and Mark strive to keep things real.

“I don’t want us to put out a podcast that’s like, ‘Hey, we’re three dads and we’re crushing it so you should be doing exactly this,’” Nathan says. “We’re screwing up, too. Here’s what we aspire to, but we don’t always execute well.”

Looking for a parenting podcast you can relate to—and learn from? Moms, dads, grandparents, aunts and uncles: give Whatcom Dads Podcast a listen.