Home Everyday Diane Garmo: Leaving a Legacy Through the Land 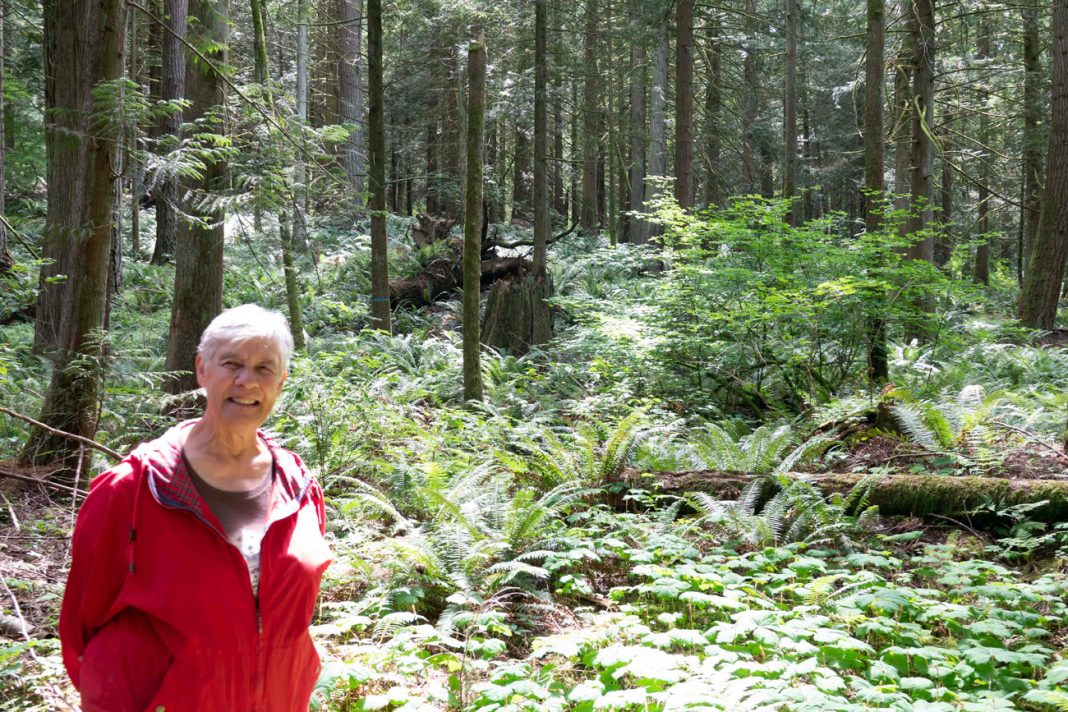 As we walk among the towering cedars of Diane Garmo’s 40-acre property just east of Bellingham, the stories of her family and their deep connection to this piece of land unfold one by one like the fronds of the ferns that envelop the forest floor. These memories—and their link to the land—are what led her to plan for what would happen there when, someday, she could no longer serve as the steward of her family homestead.

Thanks to her neighbor and Audubon birder Patricia Otto, Diane discovered Whatcom Land Trust, a local nonprofit whose function is to preserve and protect land in Whatcom County, managing it for wildlife, farming, water quality and recreation for now, and for future generations to come.

Not only does Diane now have a plan for how her land will be cared for after she’s gone, but her generosity has also led to outdoor educational opportunities for Whatcom County youth today.

Four Generations of History on the Land
In 1888 the United States government was actively taking land from the native peoples in Whatcom County and granting quarter sections to European settlers looking to call this place home. One of those homesteaders was Diane’s great grandfather, Albert Henke, who received a 160-acre plot.

As Diane explains, she points to her hand, palm up, fingers pressed together. “Henke had four daughters and when he passed away he split the land into four long and narrow 40-acre plots, allowing for each daughter to have access to Smith Road.” Diane’s grandmother then passed her 40-acre plot down to her son, George Garmo, Diane’s father. “This is the only portion of the quarter section that is still in the family.”

George Garmo was raised by his aunts and grandma on the adjacent properties. He later attended college in Pullman earning degrees in forestry and engineering. He fell in love with the forest. His mark on the property remains as he planted a variety of non-native trees from seed he gathered while traveling, including larch, sequoia and pine. He also augmented a small pond behind the house and added wood duck nest boxes around it, several of which remain today.

Diane learned her stewardship ethic from her father. George taught Diane not to cut down trees unless they were dying or too crowded—allowing the remaining trees to thrive. She learned the importance of cherishing the land, letting it be natural and free. To this day, Diane works with local forester Brad Osborne of Osborne Logging to ensure the forest is managed sustainably. “I have a Forest Practices Plan which includes developing habitat,” she says. “Each May, Brad and I take a walk and he figures out which trees are dead or overcrowded. He is so smart. He says we will never harvest more board feet than we can grow in a year.”

Diane’s mother, Frances Glazer Garmo, worked as a legal secretary at the county courthouse and was a long-time community activist in Bellingham. “She was very active in the PTA and the Red Cross,” Diane says. “When Bellingham decided they needed a football field—what is now Arne Hanna and Civic Field—she went door to door to get people to vote for it. She taught me the importance of community awareness and giving back to community.”

After living and working in Bellingham, George and Frances retired and returned to live on the property, building a single family home there in 1969. They lived there and cared for the property until around 1986 when George passed away and Frances moved to town. That’s when Diane became the property’s primary caretaker. Diane and her spouse, Kathie Hagwell, also a retired school teacher, moved in to the family home.

Now, Diane and Kathie have moved to town and enjoy traveling to foreign countries. A renter and caretaker, Denny, lives in the family home on the property.

“I have no children of my own and it occurred to me that I am responsible for this land,” Diane. says “Since the land was taken from the community by the government, I thought the best thing to do with it would be to give it back to the community.”

With only a little effort, Diane not only found a way to plan for how her land will be cared for after she’s gone, but she also created outdoor educational opportunities for Whatcom County youth today.

Using the Land to Educate Youth
Diane worked as a school teacher for 30 years, many of them in the Mount Baker School District. “When I met with the Trust, I said it would be my wish that this land be used for educational experiences for as many people as possible, including youth,” Diane says. Whatcom Land Trust worked to ensure Diane could see this during her lifetime. “Wild Whatcom now brings their Girls and Boys Explorers Clubs out to walk around and talk about the ducks and frogs and everything else in between.”

Bellingham nonprofit, Wild Whatcom, fosters lifelong connections to nature and community through outdoor exploration and service for toddlers, kids, teens and the community. Their goal is to create a future of engaged youth who care about the Earth and have the skills to lead collaboratively toward a healthy world.

Occasionally Diane joins the kids as they explore, witnessing how the Land Trust will continue her legacy for outdoor education and stewardship. The homestead is an incredible outdoor laboratory. Children can identify bird calls, look for salamanders, and identify trees by their leaves, cones and seeds. They learn about Whatcom County’s logging history as they climb giant cedar stumps that serve as nurse logs for the second growth forest. Students can watch for activity from the bat boxes and look for evidence of the variety of wildlife that pass through, including black bear, cougar and raccoons.

Leaving a Legacy Gift
Diane’s arrangement with the Whatcom Land Trust is called a Legacy Gift—donating her property to the Trust when she passes or can no longer care for it. She made plans in her will so that one day this special property and the values she learned through it will be passed on to future generations here in Whatcom County.

“I talked to the attorney for Whatcom Land Trust, and our family attorney Steve Adelstein, and they worked out the arrangement,” adds Diane. There are many ways to give, including a Legacy Gift, and the Trust is honored to help donors navigate.

“This gift is a priceless investment in the future of Whatcom County,” says Whatcom Land Trust Philanthropy Director Jill Clark. “Whatcom Land Trust is so excited to help fulfill Diane and her father’s wishes for their property—fostering a sense of stewardship and connection in the next generations of Whatcom County residents. We are forever grateful for Diane and Kathie’s gift that is already creating a powerful legacy.”

Having a plan for her property consistent with her values and the values of her family has given Diane great peace of mind. “It was a relief to have a real plan that was doable, that was achievable and I don’t have to manage. There are people who have the wisdom and resources, like Whatcom Land Trust, to preserve it,” Diane says. “When word got out about my plan, I heard from many of my parent’s long-time friends that said I was doing exactly what my parents would want. It was a reassurance, an affirmation that I’m doing the right thing. And I can still come out here and play in the woods any time I want.