Home Nonprofit Organizations Pass The Hat: Harnessing the Power of Community to Ease the Hardship...
Facebook172Tweet

Sisters Robyn Scott and Taylor Sernesky recently learned firsthand just how swiftly tragedy can strike when they unexpectedly lost their beloved father to a heart attack. At the same time, they discovered an amazing local safety net — an organization called Pass The Hat that helps Whatcom County residents during their darkest times.

Helping families through their darkest times

Pass The Hat’s concept is brilliantly simple and profoundly impactful. Each member contributes $2 every month. The combined funds are used to provide financial relief for local families suffering from tragic loss, which may be a death, house fire, or other life-changing trauma. Founded in 2012 by Galen Emanuele, Pass The Hat has helped 54 Whatcom County families so far. Emanuele now lives in Portland, but remains closely tied to the organization and this community.

“I started Pass The Hat because I know that just like me, when people hear about a terrible tragedy in their community, they want to help and do something about it,” Emanuele says. “I wanted to create something proactive that every person in the community can contribute to that not only fills the desire to help, but also makes a tremendous impact for families that are going through the worst times in their lives.”

Emanuele says after losing his brother in a car accident when he was just 18 years old, creating Pass The Hat was something he had to do. “Knowing that we lessen the suffering and provide some light for a lot of families who wouldn’t otherwise have anywhere else to turn is probably the greatest feeling in the world,” he explains. “It’s incredible. Our contributors make it possible; they’re heroes.”

Losing a loved one

Robyn and Taylor’s father, Sean, lived in Surrey, B.C., and visited his daughters on a weekly basis. When the sisters received a call from the Surrey police asking if they had heard from him, they knew something was wrong.

Sean’s employer had called police after Sean missed two days of work. For Robyn and Taylor, their first instinct was to rush to his home, but neither sister had a passport, so they couldn’t cross the border.

After several anguished hours waiting for news, a Ferndale police officer knocked on the door and officially informed the sisters of their father’s death. Accompanying the officer was Kendra Cristelli, executive director of Support Officers Community Care, a local non-profit that provides on-scene support for victims of tragedy and trauma.

Cristelli stayed with Robyn and Taylor, providing emotional and practical support. They discussed the process of having their father’s body transferred across the border to a local funeral home for cremation. “At that very moment, my sister and I looked at one another and I knew we were both thinking the same thing: How are we going to pay for this?” Robyn recalls.

“I felt an anxiety that I have never felt before,” Robyn shares. “Then, before Cristelli left, she explained that she was part of an organization called Pass The Hat and that they may be able to help us with the funeral costs.”

Cristelli is a member of Pass The Hat’s appropriations committee, which is a unique position that allows her to connect the organization with people in need. Cristelli and her team of Support Officers Volunteers are often the first people at a crisis scene, along with police and medics.

While Support Officers is able to offer some financial support, there is always a need for more. “It made sense to me that where we couldn’t help financially, Pass The Hat could be a stopgap, and if we worked in partnership, that could potentially help twice as many families,” Cristelli explains. “It grew from there and has been a beautiful partnership,” she adds.

Pass The Hat’s Executive Director, Amy Woodward, agrees. “The people we serve come to us directly from the network that we work with — the Bellingham Police Department, the Whatcom County Sheriff’s Department, and Support Officers Community Care. Cristelli is the biggest lifeline between those in need and Pass The Hat. It’s a finely tuned machine — all the wheels are running together,” she explains. Pass The Hat also partners with the United Way of Whatcom County and the Mt. Baker Red Cross, with representatives from each agency serving on the non-profit’s appropriations committee.

Everyone in the organization is a volunteer, including Woodward. “We try to keep all our expenses to an absolute minimum,” she says. “We want every single dollar to go to the families in need.”

Pass The Hat works closely with local service providers, including funeral homes, to seamlessly provide arrangements for families in distress. “Our community partners work with us so well,” Woodward says. “We are so grateful for our relationships with them.”

When Robyn and Taylor got the news that Pass The Hat was covering all of their father’s funeral expenses, their relief was immeasurable. “I felt the weight of the world lifted from my shoulders,” Robyn shares. “I will never, ever forget what they have done for us. It really goes so much beyond the financial aspect. They provided us with the ability to get the closure we needed.”

Robyn and Taylor made a vow to spread the word about Pass The Hat, and it’s been paramount to their healing process. “When my first $2 deduction came out, I felt so good knowing that I was now a part of something so great,” Robyn says.

Pass The Hat relies on this kind of word of mouth to bring new contributors, and Woodward’s goal is to grow Pass The Hat’s membership and help even more community members in the coming year. To that end, she is happy to speak to any groups interested in learning more, and she is especially enthusiastic about Pass The Hat’s Employee Match Program. “I’m really excited to go and talk to people, but we know it’s a difficult time. It has been for everyone. But we’re hoping to make more connections and get more companies to come on board. The small, locally owned businesses are really important to us. Even if they have just a few employees, they can really make a difference. It’s neighbors supporting neighbors,” she says.

For Robyn and Taylor, becoming monthly contributors has been a full-circle experience. “Although we can never repay Pass The Hat for what they have done, we can find comfort in knowing that our small contributions will help someone just like us sometime down the road.” 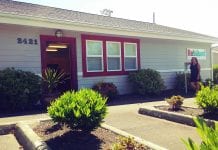 Rebound Families: Helping Others So They Can Then Help Themselves 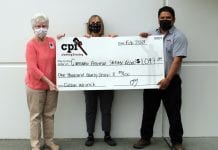 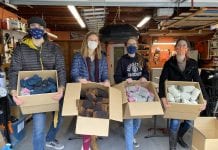 ‘Souls Without Socks’ Provides Comfort to Those Experiencing Homelessness