Home Editor Picks Ski to Sea Is Back! 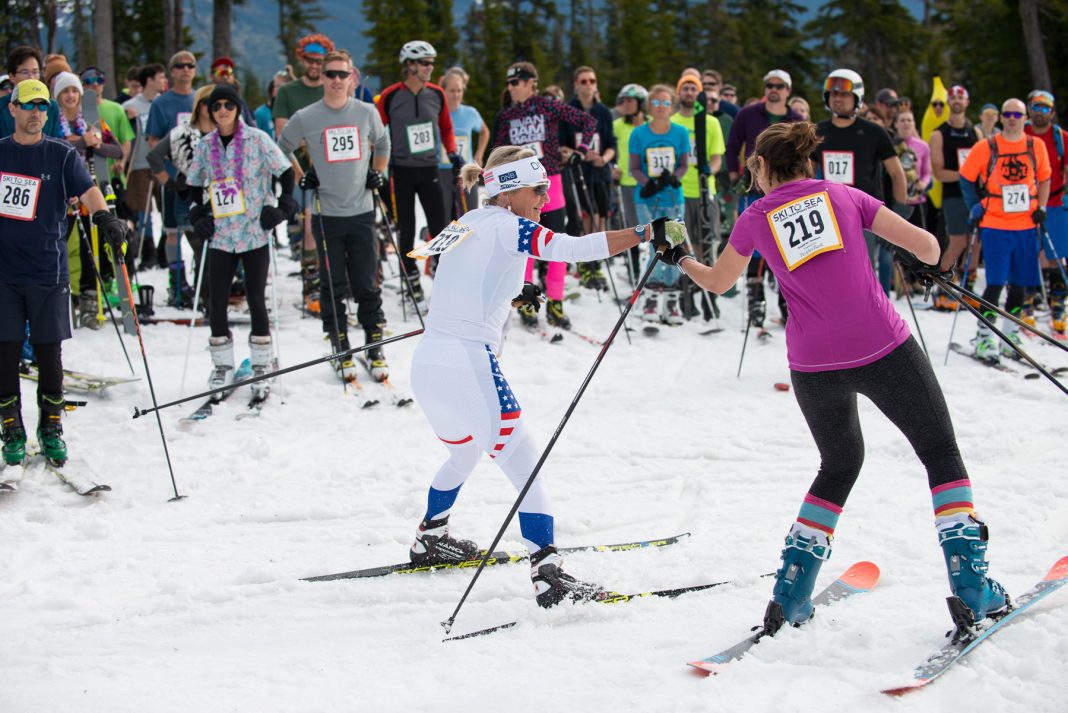 As we finally return more fully to life as a community after what’s felt like a two-year-long winter, events are filling the calendar and people are out and about. But on May 29th life in the Pacific Northwest will once again feel truly right with the return of the iconic Ski to Sea race.

Started in 1973, Ski to Sea is the original multisport relay race. This year’s teams will again ski, run, bike, canoe, and kayak their way from Mount Baker’s Heather Meadows to Marine Park in Bellingham Bay.

“To live in a place where we can have a 93-mile race course from a mountain to the bay is extraordinary,” says Ski to Sea Race Director Anna Rankin. “Having all these amazing parks and transition areas truly showcases the wonder that is Whatcom County. I really don’t think there’s anything else out there quite like Ski to Sea.”

After a two-year hiatus when COVID forced the cancellation of the race in 2020 and 2021, Rankin is thrilled to have the race back on the schedule. With green lights all around for a 2022 race, Rankin knew the place to start was reaching out to those who had been partners in the past.

Peoples Bank had been the Ski to Sea title sponsor for more than a decade when the COVID cancellations hit and continued to support Ski to Sea parent company Whatcom Events to help it stay afloat during a tumultuous time. Excited to learn the race would return this year, Peoples Bank stepped up to be the title sponsor once again.

Will Butela, assistant marketing manager at Peoples Bank, will resume his role as the Master of Ceremonies of the awards ceremony at the finish line and will join a team of employees giving out prizes at the Peoples Bank booth in Marine Park.

“Whether you’re watching someone you know compete in the race or you’re at the race to experience the energy…for us, bringing the community together for an event like this is what it’s all about,” says Butela. “It’s why we’re so passionate about supporting it every year.”

Because of the hiatus, Peoples Bank looks to get even more people involved in the fun — whether they’re racing or not. Beginning April 29th, people can enter a sweepstakes to win a ‘Ski or Sea’ dream vacation by going to www.peoplesbank-wa.com/vacation and choosing where they would rather go: to ski or to the sea. The winner will receive a $3,000 cashier’s check and will be announced at the Ski to Sea finish line on May 29th at 3 p.m. If the winner is not present, Butela will call them himself to share the good news.

With key partners on board, Rankin began to plan the race itself, which involves moving thousands of participants — plus spectators and volunteers — all in the same direction.

“In a normal year, there are always little things that come up with the course, and Mother Nature is the biggest challenge,” Rankin says. “A low snow year, or a high snow year and an early melt that causes the river to come up to a level that doesn’t work for race day, are always challenges.”

This year is not typical, so in addition to navigating Mother Nature on race day, Rankin is also steering through changes that have occurred over the last two years. Impacts on the race from ongoing local development, combined with flooding this past winter in Ferndale, have made complete changes to the cyclocross leg so it can wend its way from Hovander Park to Zuanich Park.

Another change will be in Everson, where flooding caused so much devastation. Rankin says she felt terrible even bringing the race up to local officials, but the mayor and the public works department were excited to make it work, understanding what a positive event Ski to Sea is for the community. Due to impacts from the flood, there will be much less space at Riverside Park in Everson, so this year it will be racers only, with no booths or spectators.

While putting on this year’s event seems even more daunting than usual, Rankin looks forward to putting on another fun, safe race.

“The race offers so many opportunities and so many divisions,” she says. “We have Olympic athletes competing next to family teams and high schoolers. Teams that just have the goal to finish are racing right alongside teams that want to be the number one team. We offer the opportunity for all those people to get together on the same day on the same course and experience the race together.”

With race day rapidly approaching, many teams are already registered, but there’s still room for yours. You can register at www.skitosea.com, and everyone is welcome to be a part of this local classic.