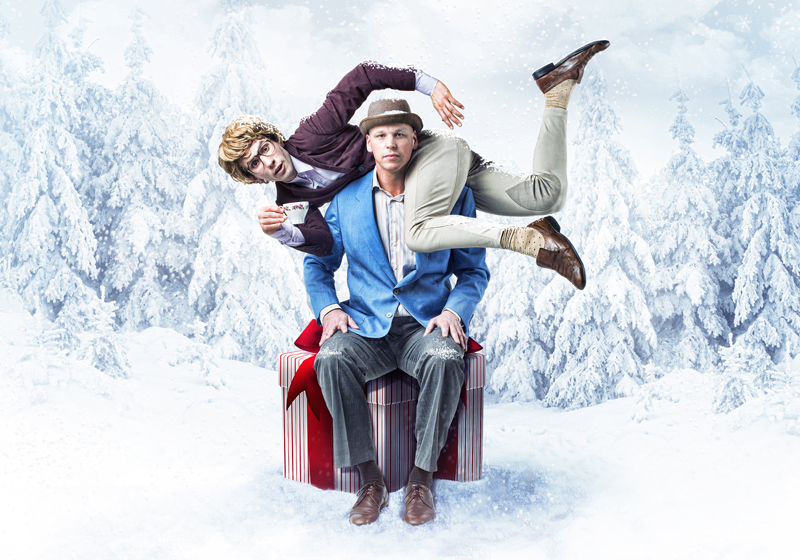 The holiday season is fast approaching and, after nearly two full years away from the stage, beloved British comedy duo James and Jamesy are back with O Christmas Tea. Whether it’s with friends, family, loved ones, or on your own, an evening spent in the theatre with James and Jamesy is sure to be an evening you will never forget.

The show will be held December 1st at 7.30 p.m. at the Mount Baker Theatre.

O Christmas Tea is a rollicking holiday spectacular that’s ideal for fans of Monty Python, Mr. Bean, and Dr. Seuss. James and Jamesy have delighted audiences for decades with their unique take on traditional British comedy and they’re excited to make their eagerly awaited return to the stages.

“After 20 months away from the stage, we are beside ourselves —  both literally and metaphorically — to be reunited with our audiences, many of whom have become like extended family over the festive season, and to again feel the buzz that only the magic of live theatre can bring,” explained Aaron Malkin (James), the taller, less-hirsute half of the award-winning duo.

The time away, due to pandemic restrictions on live entertainment, has reinforced not only the passion the duo has for its shows, but also the importance that humour plays in our lives.

“We are so excited to once again be able to bring friends and family together, especially now – more than ever – we are reminded to dream big, embrace imagination, and celebrate a childlike excitement for merriment,” added Alastair Knowles (Jamesy), the eccentric half of the award-winning duo. “There are definitely going to be some surprises for our regular audiences, with whom we’re thrilled to reconnect this season.”

O Christmas Tea is rich with wordplay, comic physicality, and cleverly crafted interactive elements reminiscent of classic British pantomimes. However, it is James & Jamesy’s boundless imagination and endearing chemistry that creates the extraordinary magic of this unique festive experience.

During the action-packed production, a Christmas wish for tea is surprisingly fulfilled in titanic proportions. As the world floods with tea, our duo must find innovative and hilarious solutions to keep them afloat as they try to make their way back home.

Already a festive tradition for thousands of theatre-goers, this year the O Christmas Tea tour is brighter than ever, with dates across the Pacific Northwest including four dates across Washington State – Olympia, Edmonds, Seattle, and Bellingham – offering both long-time fans and those new to the James and Jamesy experience a chance to enjoy the festive production.

Redefining immersive theatre, these masters of physical comedy—with over 20 comedy awards to their name—bring their audience on a jolly escapade with surprising depth in this joyous celebration of friendship at Christmas.

About James & Jamesy (jamesandjamesy.com/@jamesandjamesy)
David MacMurray Smith, Aaron Malkin (James), and Alastair Knowles (Jamesy) are creators, performers, and educators of physical comedy and physical theatre. Since 2012, James & Jamesy productions have been performed over 750 times across the UK, USA, and Canada, earning lifetime fans and rave reviews. In 2017, they sold out performances at the Edinburgh Fringe and in 2018 performed a 5-week run Off Broadway at New York’s SoHo Playhouse. Among other accolades, the physical comedians are winners of the Canadian Comedy Award for Best Live Ensemble and are 22-time “Best of Fest” winners on the International Comedy circuit. James & Jamesy continue to defy expectations with their innovative creations that delight and excite audiences of all ages. Their unique humour appeals to those of all ages and fosters an inclusive atmosphere, encouraging of audience involvement.