Many of us have fond memories of concert bands—whether we played instruments in school or attended performances. Concert bands enchant us from early ages and bring communities closer together. For Whatcom County locals, Bellingham Community Band recaptures this passion for music.

Joining Bellingham Community Band requires only previous band experience and a few phone calls. There is no audition, and some members pick up music again after decades-long breaks.

Attending the band’s regular concerts helps members fund a music scholarship and share their music with the community.

“I would say it’s almost half retired people and people who have moved to the area and want to make music,” says band librarian Ken Lingbloom. “Continuing to make music is part of their lives.”

The band annually holds patriotic concerts—two on Memorial Day at Memorial Park and Bayview Cemetery, and one on Veterans’ Day at Bellingham City Hall.

The band occasionally performs one Christmas concert at Whatcom Community College and almost always performs another at the Bellingham Cruise Terminal. The latter concert takes place during the Holiday Port Festival, so attendees can also see gingerbread houses and enjoy cider and cookies.

“It’s giving good cheer and making the Christmas season, holiday spirit alive,” says Howlett. “I think the concerts give us an ability to see if our skills are up to snuff.”

Bellingham Community Band members rehearse every Saturday at the American Legion, as they are able.

“Sometimes it can be tedious by necessity, because there are areas we need to work on,” says Lingbloom. “But most everyone feels satisfied, feels a sense of accomplishment at the end of rehearsals, almost every time.”

Howlett says the band seeks “people who love music and are willing to practice and learn music to the best of their ability.” Some members have difficulty attending regular practices, especially if they have to balance other commitments. But those who stay enjoy camaraderie and playing for audiences mainly comprised of band members’ family and friends.

“That’s why I go,” says Howlett. “I thoroughly enjoy the people, and I love playing, and playing music is good for the soul. I think that’s what we look for: a love of music.”

The band offers parts for flute, piccolo, clarinet, bass clarinet, contra bass clarinet, bassoon, French horn, euphonium, tuba, string bass, trumpet, cornet, saxophone, and percussion. “If it’s someone that wants to learn to play an instrument, we’re not the band for them,” Lingbloom says—but members always have opportunities to improve their skills.

Banding the Bellingham Community Together

“I would hope that we would continue to grow, gain new members, [and] become more proficient with our music,” says Howlett.

Despite these community ties, Bellingham Community Band is seemingly lesser-known than overlapping formal groups such as the North Cascades Concert Band and Bellingham Symphony.

In the meantime, Bellingham Community Band anticipates many more rousing performances to come. 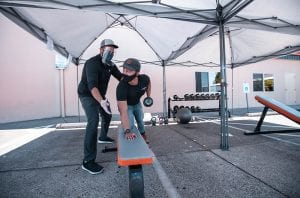