They say there’s nothing new under the sun; that every idea you can come up with has already been done by someone else. But some fun-loving Bellingham residents are putting that notion to the test by inviting you to step out onto an ice skating rink and send a beer keg sliding with care and precision towards a target. Could this be the world’s first keg curling competition?

According to Elsha Grimes, who works with Whatcom Sports and Recreation, a partnership formed between her organization, the local hockey team the Bellingham Blazers, and a brewery that was fated to cook up a one-of-a-kind event. “Last year a conversation arose with John Ayre, our Blazers President, and Aslan Brewing Company staff on how a curling fundraiser would be fun,” she says. “Then the thought of sending kegs across the ice appeared.”

With Aslan and Travis Fox of Windermere Real Estate on board as sponsors, the Bellingham Sportsplex was booked. The tournament takes place Saturday, September 21st from 6:00 p.m. to 10:00 p.m. and you won’t want to miss it—as a participant or a spectator.

“Bragging rights in the Pacific Northwest are on the line for the best two-person team in the 64-team tournament,” says Blazers Coach Colton Teubert. “My wife Ashley and I are going as ‘Zee Germans,’ dressed up in dirndl and lederhosen—we accept any challenge.”

The event is not only for competitors, and the call has gone out for spectators to enjoy the shenanigans and contribute to local sports. “The beer provided by Aslan should be a great way to fundraise and prepare for the upcoming Blazers hockey season,” says Teubert.

“We will also have DJ Initiate playing music and our bouncy castle set up for the kiddos,” adds Grimes.

And do they plan to make this a regular occurrence? “Absolutely!” Grimes says. “Maybe we’ll turn it into a Bellingham sport.” 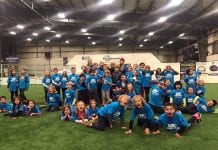 Check Out Spring Break Camps for Kids at the Bellingham Sportsplex 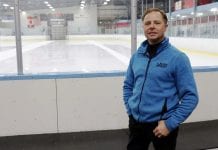 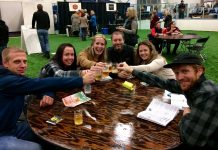