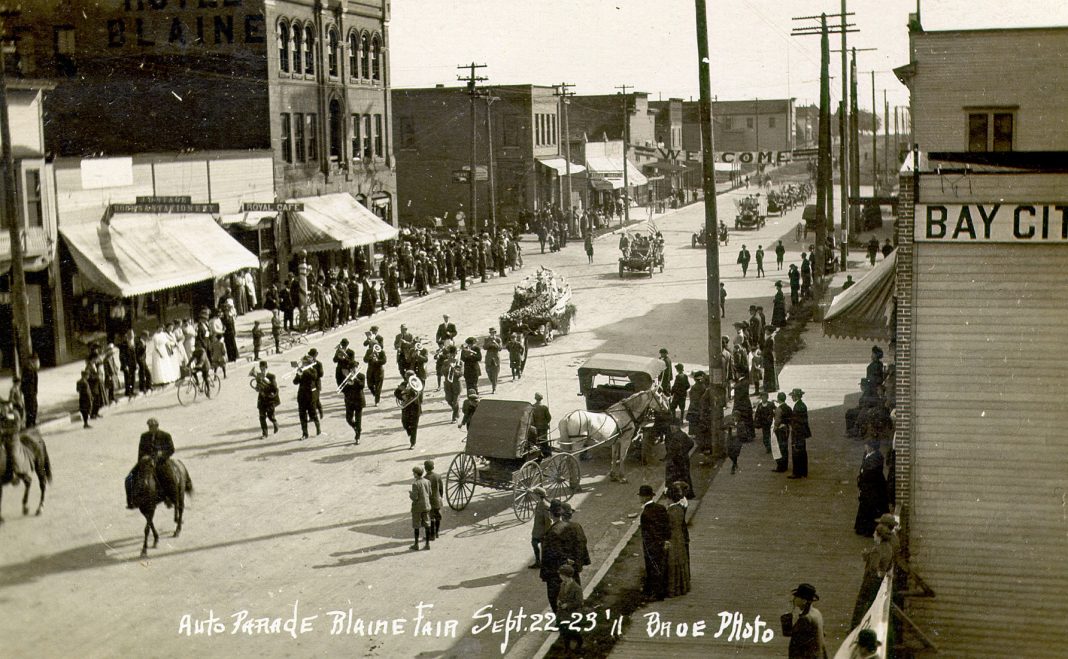 Blaine, Washington: Where America Begins. Sitting on the very northwest corner of Washington and a formal doorway between the U.S. and Canada, Blaine is a small town with a lot of history.

Blaine has changed in leaps and bounds with ups and downs, even back in its early days when it was just taking shape. First settled in the mid-19th century, Blaine was a seaport known for logging, fishing, and canning, and was once a jumping off point for prospectors going to British Columbia for gold during the Fraser Gold Rush.

Before anyone else, there was the Semiahmoo First Nation, who had been in the Drayton Harbor area for centuries. The Semiahma were a predominant part of the Birch Bay and Semiahmoo area of Whatcom County, living off the water with an abundance of marine life, especially salmon.

In 1792, Captain George Vancouver charted the area, making detailed surveys of its coastal features. When European explorers came, the Semiahma moved several times, their numbers dwindling heavily due to smallpox epidemics and warfare. Despite these heavy losses, the Semiahma’s main community still sits today between Peace Arch Park and White Rock, with strong familial ties to other groups on both sides of the border.

In June 1836, the U.S. and Great Britain signed the Oregon Treaty, establishing the 49th parallel between the U.S. and Canada. The parallel ran right through Semiahmoo Bay, and Congress formed the United States Boundary Survey Commission in 1856 to officially mark the line. The American Boundary Survey Commission Camp set up on the mouth of Campbell River; the camp marked the boundary.

Gold was found on the Fraser and Thompson Rivers in southern B.C. in 1858. Thousands of prospectors came north, and the Fraser River Gold Rush boomed.

Two settlements were born early that summer, both called Semiahmoo. One was on the Semiahmoo Spit, and the second where Blaine is today. Houses and a hotel were built. As long as there were miners, there was plenty of activity.

Unfortunately, the boom was short-lived. The work of the International Boundary Commission tapered off, and the rush was a bust, ending around 1860. Both Semiahmoos were left deserted, with only a handful of settlers staying.

Then came 1870, when President Ulysses S. Grant encouraged people to move west, and Semiahmoo slowly came back to life. Many moved there, including the Cains, one of Blaine’s most notable families. At one time, the Cains owned most of present-day Blaine and built many of its first landmarks. James Cain, the first mayor, later recorded his plat and declared the beginning of a new town on September 13, 1884.

The town—previously called Concord—was renamed in honor of James G. Blaine, a Republican presidential candidate. Though he lost the election, Blaine remained a town favorite among the voting men, and the name was kept. Blaine was officially incorporated on May 20, 1890.

Logging, lumber, fishing, and canning became Blaine’s biggest industries. Logging sites initially started because of the thick forests around the Cain plat. The remaining timber was used to build wharfs. The first sawmill opened in Drayton Harbor, and soon several were in operation on the waterfront. Much of the lumber helped rebuild San Francisco following the devastating 1906 earthquake and fires.

The Alaska Packer’s Association, the world’s largest salmon cannery, operated for decades on the Semiahmoo Spit. Daniel Drysdale bought a small salmon cannery site at the end of the spit, naming it Point Roberts Canning Company. The newly made Alaska Packer’s Association soon bought Drysdale’s company and Drysdale would become vice president. More buildings were made, still-familiar Semiahmoo landmarks today, and ran for 75 years. The cannery later became Semiahmoo Resort after the APA was sold in 1982.

Border enforcement was lax on both sides in early years. It later became more aggressive in the 1890s, and international intrigue came with it. Smuggling, rum-running, and border-jumping soared in 1919 after Prohibition began in the United States. The situation later reversed after Prohibition ended. Due to restrictive drinking and entertainment laws in B.C. (including a ban on Sunday drinking), Blaine, Point Roberts, and Sumas boomed with taverns and adult entertainment.

After the town was platted, Blaine grew. The first school was built in 1886. In 1891, Blaine organized a Chamber of Commerce. In 1904, the first fire department was organized by Frank Odell, who became the first fire chief. In 1921, the Peace Arch monument was built. By the 1920s, businesses lined both sides of Peace Portal Drive, from hotels to fish markets to ice cream parlors. The Blaine School District formed in 1941.

Today, the lumber and canning industries are gone, and much of Blaine’s economy relies on cross-border Canadian trade. However, more and more of downtown is being revitalized, from Skye Hill Station to the Drayton Harbor Oyster Company’s new location—and the marina is home to hundreds of sailboats and yachts.

“Thousands of people get their first view of the United States at this International City of Blaine, and its radiant prosperity in its setting of farms and forest between mountains and the sea, can but give a most favorable impression to the stranger and fill the heart of an American with pride.”

Featured photo courtesy of the City of Blaine