We certainly have a lot going for us here in Bellingham and Whatcom County. We enjoy coastlines and mountains, woods and wide open spaces. We also boast a vast array of restaurants to fit almost any taste and museums and cultural attractions around every corner with music, theatre, art galleries, and coffeeshops. We’re home to enough breweries to boggle the mind. But we also witness a situation here that is troubling cities across the country: our population of people without homes to call their own is large, and keeps growing.

There are a number of groups working locally to address this challenge, and all of them have chosen to do so from different angles. One of the leading organizations in our area is Lydia Place. They have decided to seek out the root causes of homelessness, and find holistic ways to address them. In their mission to disrupt the cycles that keep people trapped in poverty and helplessness, they’ve found that an effective place to focus their attention is on children, and the families to which they belong.

Executive Director Emily O’Connor tells the story of a former client, a woman with a small child who was in their transitional living program for 18 months. She came to them feeling defeated, and couldn’t see a way out of her predicament. But when Lydia Place was able to put a roof over her head, her new-found stability allowed her to take on a part time job. It offered minimal hours, and wasn’t very exciting, but the woman was well motivated to give it her all. She started picking up more hours, and moved up step by step, until she was offered a full time position that included more responsibility. This success bolstered her self-esteem, and showed her that she had value, that she could have a future. Her next move was to find an apartment, and finally she was able to walk into a meeting with her case manager, head held high, and announce that she wouldn’t need help from Lydia Place anymore.

What a proud moment for her, knowing that she had turned her life around, and what a fulfilling moment for the people that had been standing behind her – not being needed was the best they could hope for.

And imagine what her little son witnessed: He went from being homeless with no options, to living in a home of his own with his mother working. If he had continued living without a home and support – if he had only ever known that kind of life – the odds are pretty slim that he would find chances to move up the ladder. Even worse, he may never have known that the ladder of opportunity even exists, or that he deserved the chance to make his way up it.

The most visible face of homelessness may be the single guy downtown, panhandling and pushing his belongings around in a shopping cart, but the statistics tell a different story. Twenty-five percent of homeless individuals are children; that’s 1 out of every 25 children in Washington public schools. They are not as easy to see because they often sleep in cars, and are dropped off at school in the morning while their parents head off to work, or whatever routines might sustain them.

In this kind of situation, parents are likely spending most of their energy surviving, and there’s not much time left to create a supportive community with others that need a hand up out of crisis. Lydia Place has stepped into provide that community, and that support.

In the beginning, back in 1989, that meant housing seven families headed by single mothers in a large house on a piece of property in central Bellingham. Now a large office and garden share that property, they operate multiples houses around town, and all together serve no less than 150 families. It’s an astonishing amount of growth, and they’re not doing it alone. They rely on other service organizations and receive help from businesses such as Bellingham’s DeWaard & Bode, and private citizens.

Lydia Place is happy to accept donations, and would love to see folks step up to provide continuing support. They also hold events throughout the year to get the word out, and to raise the funds that keep them working.

They use those gifts in a number of ways. When demands are greater than their capacity, they put families up in hotels. They offer Parent Education during home visits, Renter Education classes, and all sorts of counseling, to name just a few of their programs. And all of this leads in the same direction: meeting people where they are in need, giving them a stable place to pull themselves together, and doing all they can to help people provide for themselves. 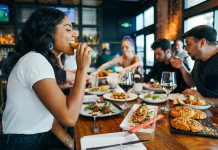 Dine Out for Peace During Conflict Resolution Month