Sehome High School has been a construction site since the groundbreaking two years ago, housing both new and old buildings. The original building, built approximately 50 years ago, was replaced by a newer, more up-to-date facility, which opened on the first day of second semester at the beginning of February. The process to get to this point has been extensive.

To design the building, Sehome’s administrators put together a design advisory committee that consisted of parents, middle schoolers, high schoolers, taxpayers, and building leadership. “We really didn’t know what the building would look like,” says Michelle Kuss-Cybula, Sehome’s principal. “We went through this entire process to bring people through what they value, what the community values, and what the future will value, and came up with some foundational ideas, our core beliefs about the building.”

Much of the discussion centered on making the building flexible. Kuss-Cybula wanted to ensure that the new Sehome would stand the test of time. “We’re designing for the future,” she explains. “Is it going to be outdated in 10 years or 20 years? Does it meet our current and future programming needs?”

To deal with these concerns, the design advisory committee spent many hours discussing new possibilities before turning to the larger community. “We spent a long time, a lot of late nights going through that entire process until we were able to get some sketches, and we went out to the community,” Kuss-Cybula says. “We were able to get input from the community, brought it back to our team, and then landed on the final design of the school.”

Sehome’s new school features lots of natural lighting, as well as breakout spaces designed for students to work outside their classrooms. “We wanted to bring larger extended learning areas so it’s not just the four walls of your classroom, but breakout spaces,” says Kuss-Cybula. “We used a lot of those design elements to really create the standard classroom, and then leaned on the core ideas of innovation and flexibility of space for the larger learning areas.”

A standard classroom consists of many windows, an interactive whiteboard, multiple smaller whiteboards, tables that can be easily moved and adjusted, as well as three different types of chairs: regular chairs, chairs that rock, and taller chairs that match with taller tables. The breakout spaces are distributed throughout the school, each featuring small couches or other seating with whiteboards.

Kuss-Cybula and the rest of the design committee also wanted to pay homage to the old building and past generations of Sehome students. “We really tried to take a lot of the old features of Sehome and pay honor to those that walked before us in the old building,” she said. “We had a lot of conversations about the gym floor–how do we reuse some of that stuff in our building to make it look clean and pristine and new, but yet old and timeless and classic?”

The gym floor was used as flooring in one of the stairwells, as well as the wall outside the new gym. Other things that were reused included a giant nautical steering wheel that used to hang in the student lounge, but now hangs on the wall near the new commons.

So far, response to the new building has been largely positive. Many involved, including those from Dawson Construction, the company that built the school, are actually Sehome alumni. They’re very proud of the work they’ve done. “There’s been fun stories shared about the old and the new, and not once did I hear from any contractor that was a Sehome alumni, ‘it’s really a shame you’re tearing that building down,’” Kuss-Cybula says. “Not once did I hear that. I heard instead, ‘what an honor it is to be working on this project.’ I’m so excited for the kids to have this new building.’”

Kuss-Cybula also went through the old Sehome archives to find photos from the ribbon-cutting of the original building. She put all of these finds into a display case, complete with instant photos of alumni who attended the alumni night that Sehome hosted a few weeks ago. “I think the alumni were really impressed and proud of the new building, and that we were able to take some of those elements that told a story of their history and legacy they left behind for us,” she says. “It’s been really exciting to hear all of the stories of past alumni, and future students who are excited about their grandparents and parents that have walked these halls.”

Current students and staff are also excited about their new building, even though they were a little hesitant at first. “We were pretty sad before we moved in; a lot of the kids are going to miss this place,” Kuss-Cybula says. “Our staff was sad, but I tell you, when they started setting up their new classrooms and students started coming in, the space is so bright and light and airy, and the environment is breathable – just brightness and uplifting your spirit in the new building. There’s so much light and hope in this new building.”

However, even though the big move is complete, there is some work left to do. The old building is decommissioned, and once the demolition is complete, the new parking and playing fields will be built. The plan is for the bus loop and parking to be in front of the new building, with a running track behind it. There are also plans for a softball field, football field, tennis courts and soccer field to be built. The goal is for the campus to be completely done by fall 2019. According to Kuss-Cybula, “This is definitely going to be something the community can hang their hats on and be super proud of.” 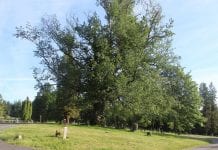 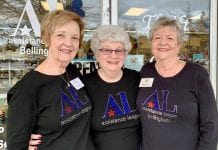