Sunshine. Laughter. Masks. Every summer since 2007, an ensemble of actors has gathered under the direction of acting and movement professor Rich Brown to discover the imaginative world of Commedia Dell’Arte – one of the most physically demanding theatre practices.

Each player in the Western Summer Theatre Commedia Dell’Arte troupe has a creative command of gesture and space, and the ability to breathe life into characters older than Bellingham. Experience their Commedia in the Park performance at Maritime Heritage Park in July. The best part? It’s free!

Commedia Dell’Arte is an ancient artform originating in Italy in the mid-1500s. At the time, theatre was only available to the wealthy. Theatre for the people was lacking. Seeing this, soon-to-be commedia players took old plays, like Roman comedies, and revamped them.

This style of theatre features masks with exaggerated features. This unites characters in an imaginative realm where actors improvise performances based on sketches and scenarios.

But this wasn’t just for fun – it was life or death. Commedia was born in the marketplace and their product was laughter. If the performers didn’t make the crowd laugh, earning some coins in the process, they didn’t eat. As entertainment for the poor and working class, these groups spawned comedy for the people.

“Commedia players focused on low comedy and body comedy; not just ‘body’ – B-O-D-Y – but ‘bawdy’ B-A-W-D-Y,” says Rich Brown. “Lots of comedy about the body and all of the different systems of the body; the pooping, eating, farting, sexing – you name it.”

Commedia troupes traveled from village to village, with other artists popping up across France, Spain and England. While there were regional differences, the characters, known as “stock characters” remained constant.

Pantalone is a Commedia character who is the classic, greedy, dirty old man. Arlecchino is the tricky servant. Il Dottore is the loud bombastic expert in everything who really knows nothing. Il Capitano is the braggart solider who swears he is the greatest solider ever but, on the inside, is a total coward. Pulcinella is the boss and trickster. This is usually the meanest Commedia character because they like to trick other characters just for the fun of it. Then there are the young lovers and the servant class of characters.

Each of these stock characters can be traced back to Shakespeare and plenty can also be found in today’s writings. For example, Il Dottore is Falstaff. Pulcinella is Mr. Burns from The Simpsons. These characters are familiar, distilled down into a perfect simplicity we can recognize anywhere.

“One of the great things I love about Commedia is it was a first little step toward equality,” says Brown reflecting on each of the stock characters and the history behind them.

Back in the mid-1500s, female roles weren’t played by women. In Shakespeare’s plays, female characters were played by men dressed as woman. Imagine the confusion when performing As You Like It.

However, in Italy, actresses were standard on the stage thanks to Commedia. When performing is life or death, you find ways to succeed. For commedia, that meant finding actresses. That’s why the young lovers are always unmasked. The rarity of seeing a woman onstage was a spectacle and the last thing you want to do is hide her face. Today the young lovers remain unmasked even though you’ll see a variety of body-types and genders playing the stock characters.

What does it take to bring Commedia Dell’Arte to life today?

“It starts with a lot of sweat,” Brown says. “It’s a two-week intensive and each day the actors have two to three-hour long classes with me and then a two to three-hour lab with the teaching assistants where they are creating the scenes with the stock characters.”

Each session begins with an intense workout to maintain the extreme physical bodies of the stock characters. Remember how the troupes from Italy traveled? As soon as the language barrier popped up, a person’s body became fully engaged to communicate the story to the audience.

The masks can be traced to animals. For example, the character of Capitano is like a rooster. The player must flex their spine, lead with their chest and have powerful legs to root themselves. The masks help major emotions like fear, anger and joy to come out in a big way and each player is prepared to go all out.

“For Arlecchino, it’s all about food; always starving, hungry and dying,” Brown says. “Arlecchino is not the smartest or the sharpest. One Arlecchino appeared on stage and saw the sun and because it was round, thought it was a pizza. Another player in an Arlecchino mask and their drive for hunger will get into something else. We had one Arlecchino realize they could eat grass and that became a whole solo scene – and then realizing they’re at a park, surrounded by grass!”

Every Commedia performance is different because of the players, the drives and the discoveries that are made. Commedia might have a central idea but if the audience isn’t laughing, the story will change as needed.

“We are working to give a gift the community,” Brown says. “This has always been free. We specifically choose Maritime Heritage Park because that’s where a large part of the Bellingham homeless community live and spend time in the summer. Our goal is to go down there and do the show for them and the whole community.”

Commedia is meant to be outdoors and for the people. Experience it at Maritime Heritage Park on Thursday July 19 through Friday July 20, 2018. 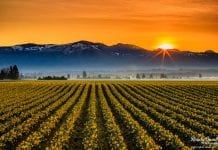