Paul Tuttle stands in his backyard shop on Orleans Street at the ready. His fiancé Ashley Galindo is his fail safe. Just in case he’s accidently overwhelmed by current, Galindo stands attentively at the electrical outlet ready to pull the plug. She’s taken the precaution of turning off any unnecessary electrical devices inside the house so as not to overwhelm old circuits (again). “I make sure everything is off so I’m not using any extra juice because this thing will take up quite a bit,” Tuttle said.

Everyone is instructed to wear sunglasses to protect their eyes from the bright, flashing, lightning glow and not to touch the table or make any sudden movements. The table is repeatedly saturated with the mist of a water bottle and three nails are driven into an evenly spaced line down the center of the tabletop. The crackling sound emanates through the air like a crisp noise all creatures instinctively recoil from.

Tuttle puts on thick rubber gloves as a cautious hush falls over those gathered. Fractal patterns fan out like fiery ferns as Tuttle conducts the electrically charged energy to the desired direction on the table by simply touching different areas on the edge. Then the current travels from the piece of jury-rigged metal through the tip of a foot long, electrical taped, PVC pipe handle, giving Tuttle more room between his hand and the point of contact with the current.

The wood smokes as patterns fan out toward the nails. The electricity seeks to reunite from where Tuttle repeatedly touches the edges back to the nails at the center. The 2×6 lumber he uses to create one of a kind fractal art pieces will eventually be covered in epoxy and become perfectly polished- that’s after he chips out the burnt pieces of flaking charcoal.

Pyrography is as fascinating to watch as the term implies. Also referred to as the Lichtenberg technique, Tuttle uses a transformer he salvaged from a repurposed microwave to conduct enough electrical current to travel through the wood. The process is slow and methodical. “Once the current makes the connection to the nail, it starts to burn the wood very deeply. Then you have to stop and make a new connection,” Tuttle explained. Even though he cannot predict where the burning lines will travel, he continually moves the contact handle around the table until it’s covered in one of a kind fractal patterned magic.

Tuttle began honing his woodworking skills with a master woodworker some years ago and began to put his own shop together by purchasing a table saw from the annual Grizzly Industrial garage sale. He soon began to collect all the necessary tools he needed for experimentation with new designs and woodworking techniques.

The elements of fire and wood were meant for one another. After drying the fractal pattern off with a heat gun, Tuttle sands the grain and gets the black charcoal off, then brushes out all the deep crevices. “To scrape and clean the whole table will take at least a couple of hours,” Tuttle said. And there’s a plethora of techniques for filling in the charred out crevices with different elements before the epoxy is affixed.

Tuttle is getting an increasing amount of customized tabletop orders. His unique furniture has inspired a company name, “Paulywood,” his childhood nickname combined with his newest favorite element. Being a welder by day and a woods smith by night is hard work he finds gratifying. Tuttle has recently begun working full-time for Innotech– a company that makes processing equipment and custom metal designs. “I like working at a place that makes my brain work harder and building new and custom projects every day is fulfilling,” Tuttle said. “Every day I have to evaluate what needs to be done to make a new product.”

But it was Galindo’s sister who got him started with fractal burning. Tuttle remembered, “Ashley’s little sister saw the burning online and said, “This is cool, you should try it.” Tuttle immediately jumped on the Lichtenberg technique, chose larger and larger pieces of wood to work on and has been perfecting the method ever since. Through his experimentation, he’s discovered different ways the fractal patterns can be controlled and the myriad methods he can employ to alter where the metal meets and attracts the current.

Tuttle has been stainless steel TIG (Tungsten Inert Gas) welding for six years. To combine his talents of molding metal with woodworking has been a natural progression.  In the future he said, “I’d like to expand and move on to woodworking exclusively. I like the aspect of having metal fabrication under my belt. If I want to fabricate a metal frame, for example, I won’t ever need to outsource that, I’ll do it myself.” After finishing the table he’d been working on for several weeks, his client was more than satisfied. His new dining room centerpiece would certainly be a conversation starter. As his art evolves, Tuttle said, “There are bigger and better designs to come.”

For more information on acquiring an original piece of your own, email Paul Tuttle at paulandashley99@gmail.com. 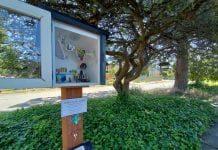 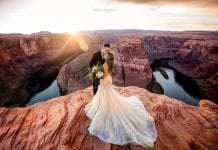