As the movement to legalize cannabis progresses, a new Bellingham organization wants to help those who choose to use the plant to do so mindfully. Bellingham’s Forum de Freedom will host its first official event on Monday, Dec. 12 at 5:55.

The Center for Mindful Use (CMU) kicks off programming in its new home with a free talk on “The Importance of Set and Setting” by Glenn Girlando, executive director of Breathwork Northwest. Mike Hiestand, the co-founder and director of the Center for Mindful Use, hopes the new free speech forum — which was once a charter school gym — will be a place to speak freely on cannabis use and the issues confronting the new and growing industry.

Cannabis, even researching and talking about it, has been forced into the shadows for the last century, Hiestand says, and the information has tended to be pretty one-sided. “Cannabis is ready for new spokespeople,” Hiestand says. “The Center for Mindful Use will be a place for those speakers to say what they need to say.”

Hiestand says the center’s mission is not to advocate cannabis use, but to provide a place to freely and safely gather to share reliable, truthful information. “Cannabis is not for everyone,“ Hiestand says, “and we’ll talk about that. But some people say they have found it helpful to their lives and it’s high time to hear from them as well.”

CMU’s list of planned programs includes social, political, artistic, medical, spiritual, cultural, recreational, legal and historical topics. He hopes speakers will contribute to a more honest and open dialogue about cannabis and the “best practices” for its reintroduction into modern society. “’Just Say No’ was largely based in fear,” Hiestand says. “We’re more about ‘Just Say Know.’”

As a former journalist, a longtime First Amendment and Press Attorney and recipient of the 2014 Hugh M. Hefner First Amendment Award in Education, Hiestand looks forward to providing a platform not only for cannabis-related issues, but for free speech generally, which he believes is needed now more than ever. The opportunity to create a place like the Forum de Freedom has been a lifelong dream for Hiestand.

Cannabis and the drug culture played a significant role during the 1960’s but it wasn’t always positive, Hiestand says. Timothy Leary’s message to “turn on, tune in, drop out” was, as Leary himself later acknowledged, too often misinterpreted as “get stoned and abandon all constructive activity.”

“Our message is that if you choose to use cannabis, you can also choose to do so mindfully, so it enhances your life and the world,” says Hiestand.

The Center’s first speaker, Glenn Girlando, has helped create positive, supportive space for thousands of explorers of consciousness. Much of his work has been guided by Dr. Stanislav Grof, one of the founders of the field of transpersonal psychology and a researcher into the use of non-ordinary states of consciousness for purposes of exploring and healing the human psyche. Girlando will provide tips about how to create a safe and welcoming physical space or setting when using cannabis as well as tips for entering the experience with a positive, intentional mindset that helps build the essential foundation for mindful use.

Space for the Forum de Freedom has been donated by Satori Cannabis Boutique owner and CMU co-founder Quinn Sharpe. He says he created Bellingham’s Satori store, whose grand opening is Dec. 9, in part to help change the image of cannabis. That goal is evident from the minute you walk into the store, which is bright and well-let, thanks in part to the antique, crystal chandelier that hangs from the vaulted ceiling.

Don’t expect blasting hard rock, Satori General Manager Joshua Besecker says. You’re just as likely to be greeted by classical jazz and a “budtender” ready to compare cannabis strains, farms and growing techniques much like a sommelier in a wine store. Besecker says that most Satori’s “budtenders” took part in a 2-week orientation, which included cannabis classes and visits to various dispensaries and cannabis farms.

Sharpe says it’s all part of Satori’s effort to give their customers a different and meaningful experience. “We call it a cannabis boutique for a reason,” Sharpe says. The store is located in the front half of the historic Bellingham Foundry building, one block from the downtown Bellingham Farmer’s Market. The Center for Mindful Use occupies the rear half of the building, which was most recently used by the Anything Grows charter school.

Sharpe’s team undertook a major renovation to restore and preserve its past. Historic photos of the building, built in 1904, line the shop walls. Forms, molds and other material taken from the building’s basement are on display. Also on display is a giant “Drugs” sign, rescued – “and repurposed,” Sharpe laughs, from Spokane’s landmark Altamont Drug Store. The sign is registered and its story told in the national Heirloom Registry.

Sharpe says he’s delighted to help support the Center for Mindful Use. “CMU and Satori are on the same page. We both want grandmothers to feel safe and comfortable in this new world.”

The Forum de Freedom is located directly behind Satori cannabis boutique at 100 E. Maple Street, site of the Old Bellingham Foundry. The entrance to the Forum is on Commercial Street. You cannot enter the Forum through Satori. Seating for the Center for Mindful Use talk on Dec. 12 is free, but space is limited. More information about the event is available here. For more information contact Mike Hiestand, Co-founder and Director of the Center for Mindful Use, 360-393-8916, mikehiestand@gmail.com or Quinn Sharpe, Owner of Satori Cannabis Boutique, 360-746-8478, quinn.sharpe@SatoriMJ.com. 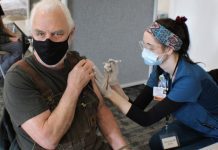