The solar industry in Whatcom County has never been hotter, and local installer Western Solar is at the forefront of providing solar arrays for homes and businesses. Washington’s unique incentives currently make the Pacific Northwest one of the best places in the country to install solar power right now.

Why Solar Power in Western Washington?

Washington has a bit of a reputation for days with lots of cloud cover, but Washington State is actually a great location for producing solar energy! The Puget Sound area actually gets 30 percent more sunlight than Germany, the world’s leading user of solar.

Being so far north, Whatcom County’s summer days are long and relatively cool, which means that solar panels actually work better here. “A July day with 16 hours of sun and a temp of 70 degrees is really optimal,” Miller says. It doesn’t have to be a perfect sunny day for solar to work.

Whatcom County is also rich in opportunities for solar because Washington residents enjoy the best combination of solar incentives in the nation.

Unlike many other states, utilities in Washington are required to allow customers to overproduce energy, to accept that excess energy, and then allow you to spin your meter backwards. In other words, they purchase excess energy from you and credit it back to your account automatically.

“Some other states don’t even allow you to put power on the grid, or they charge monthly and annual fees,” says Miller. “Here in Washington, the utility works as your unlimited, free battery storage.”

Installing solar panels on your home or business is no small financial undertaking. But prices have fallen dramatically in recent years—and federal and state financial incentives have never been higher.

“We’ve hit that moment where prices are at an all-time low,” says Miller. “It’s about half the price it was five years ago.”

The first is net metering, mentioned above, where customers can push power they’re creating, but not using, out onto the grid.

“That’s a big one and a long-term benefit,” says Miller. “For the next 40 years, if those panels are on your house, you’re going to be net metering power.”

Other incentives include a 100 percent waiver of all sales tax on solar products and installation, and a 30 percent federal tax credit. “That’s a tax credit, not a tax deduction,” Miller clarifies. “So as long as you’re working and paying some sort of tax, it’s basically the same as cash.”

Right off the top, you have almost a 40 percent savings without even turning on your new solar system.

“Another big one is the production incentive,” says Miller. “Other states either pay a small upfront rebate or rebates on excess energy; here in Washington, they pay you cash for every single drop of energy that comes off your roof.”

The amount solar customers are paid ranges from 15 cents per kilowatt hour to 54 cents, if the installation includes all made-in-Washington materials. “That’s the highest rebate currently in the United States for residential solar,” says Miller, “up to $5,000 per year.”

Western Solar works with local solar panel manufacturer itek Energy—just a couple miles down the road from its office—for almost all the systems they install, so those customers automatically get that 54-cent rebate.

“We call them our silent partner,” says Miller, “because without them, our industry really couldn’t do what it’s doing. When you purchase a system from us, 80 to 85 percent of the money you spend stays in Whatcom County.”

Wondering if solar makes sense for your home or business? Western Solar offers free site assessments to anyone who wants to find out.

“We come out to your site and analyze 12 months of electric bills to learn all your energy usage patterns,” Miller explains. After reviewing usage patterns, they will measure the roof and analyze the number of solar panels that will fit in the space available.

The next step is to take readings with a device called a Solar Pathfinder, which takes shadow readings that take into account trees, telephone poles, and neighbors’ houses. Back at the office, they run the site-specific readings through a government program that has precisely tracked weather patterns for 30 years.

“We’re able to tell a customer exactly how a system is going to perform on their roof and exactly how many panels they need,” says Miller. “There’s a real science to it—it’s not just throwing 20 panels on a home.”

Every project is slightly different, but Western Solar strives to offset 100 percent of a customer’s annual usage. After the system has paid itself back, you can expect to continue using the panels for at least another 25 years.

“As far as investments go, it’s a pretty good one,” says Western Solar marketing coordinator Trish Haveman. And she should know—before she came to work at Western Solar, she was a customer.

“I was the ultimate skeptic,” she says. “My husband is a software developer and loves data. He said, ‘Let’s just get an assessment.’ I’m in support of helping out the environment, but I wasn’t going to do this if it didn’t pencil out for us financially.”

Josh came out, collected the data, and ran the numbers—and it clearly made financial sense.

The couple moved forward and when they received their 30 percent federal tax credit, they decided to invest that $10,000 in even more panels; they now run their home and two electric cars on solar energy derived from the ground-mount system on their five-acre property, offsetting upwards of 90% of their electricity use.

“I like the fact that I came to solar as a skeptic,” Haveman says. “If you’re even remotely interested and have an open exposure, just do the site assessment; you can look at the numbers and decide if it’s for you.”

Each site assessment includes a detailed 25-year financial analysis that shows what you’ll save on your electricity bill, what you’ll receive in state production credits, and factors in the 30 percent tax credit.

“And oh, look: At year five, you’re not in the red anymore, you’re in the black,” Haveman says.

The people behind Western Solar

Jack Hardy, a longtime professor at Western Washington University’s Huxley College, started the company a decade ago after retiring from teaching. Back then, solar wasn’t about saving money—it was about saving the earth.

“He decided to build some solar homes out by Lynden, primarily doing it for the environmental impact,” explains Miller, who joined Western Solar early on, wearing many hats, from sales to office management, marketing to leading the installation crew.

Western Solar launched just as the solar industry began to soar; industry growth has been between 50 and 65 percent every year since 2008.

“We went from doing about 12 projects that first year to now doing five projects every week,” says Miller. Hardy retired three years ago, and Western Solar continues under Miller’s guidance.

Western Solar is one of the few local solar companies that do everything in-house, from sales and installation to remote monitoring of many customers’ systems.

It’s a team that Miller has carefully grown.

“We’ve recruited experienced guys from solar companies all over the place,” he says. “We’ve got people dropping off applications every day, but before we hire anyone, we really make sure they’re going to be the right fit.”

Solar is for Everyone

As the solar industry has grown and changed over the years, so has its customer base.

“We’re doing more work out in the county,” says Miller. “I would say the lower the income the more likely they are to put in a solar system, because it has a bigger effect on their pocketbook.”

Miller says Western Solar has completed far more projects on smaller homes and outside the city limits than it has, for example, on million-dollar homes in Bellingham’s high-end neighborhoods.

“This is a middle-class thing—and it’s not all tree-huggers,” says Miller. “Our customer base is evenly split: upper class, lower class, left-wing, right-wing. It used to be all environmental types, but now, once you start talking numbers and dollars, everyone can see that solar makes financial sense.”

Village Books and Paper Dreams: Building Community One Book at a Time 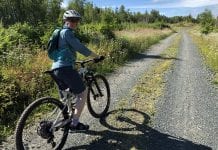 Empowerment Is the Goal: The Resilient Relationships at the Heart of CorePhysio

Building community one book at a time is the mission of Whatcom County’s largest independent bookstore, Village Books and Paper Dreams. Anyone...