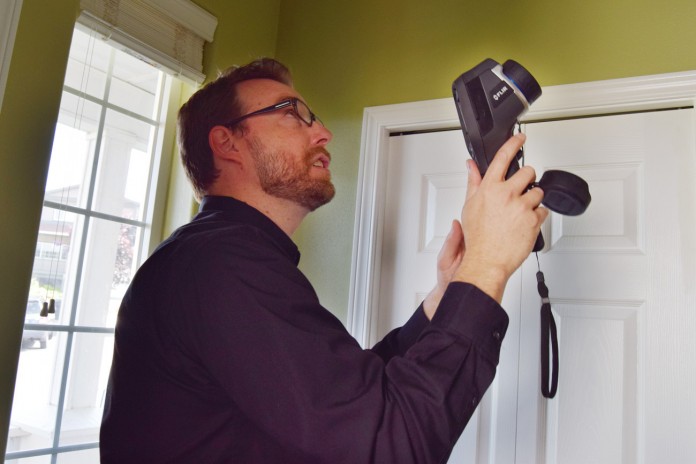 When my husband and I moved into our Bellingham home two years ago, we were excited to have radiant-floor heating throughout; a Fairhaven rental we lived in many years ago had the same and created almost no dust.

Our 10-year-old son has mild asthma, seemingly affected by the dust tossed around in our previous homes with forced-air heating.

But to my consternation, our new home still gets just as dusty as our last place—perhaps even more so.

Wes Diskin with Barron Heating arrived early one recent morning to put my house through the home performance ringer—testing it to see how healthy it is and the ways Barron can optimize our indoor air quality.

I had been thinking—naively, it turns out—that radiant heating would certainly mean less dust. Not true. Every home is different and numerous factors can cause excessive dust, poor indoor air quality, and health issues.

“I fix homes for a living,” Wes says, standing in my kitchen, glancing around. He’s been with Barron Heating for eight years and underwent extensive Home Performance training three years ago that changed everything about the company’s approach.

“We’d always just gone off of the science we knew,” Wes explains. “And we learned we’d been unintentionally doing the wrong work. Now we’re at a different level of professionalism and knowledge.”

Right away, he can tell our home needs some fresh air ventilation. “It doesn’t stink,” he says, “but I live in a very well-ventilated home and I can tell the difference right away.”

Wes has seen it all. He describes a situation where people living in a home similar to mine—newer construction, seemingly spotless and clean—lived with skin rashes for years, caused by allergies to insulation.

He runs his finger along the top of the pantry doorway and shows me the resulting dust—well, what I believe to be dust. But Wes knows better.

“If you pick up dirt from outside and you smear it between your fingers, it crumbles,” he says. “But this rolls, because it’s held together by paraffin from the insulation. You have insulation fibers in your dust particles.”

I wince, and Wes assures me this is common. What varies is the levels of insulation and how irritating it is to individuals.

Wes explains in layman’s terms the science behind airflow in a house.

“A house is just a long straw that sits upright,” he says. “You have it open at the top and a bunch of holes poked in at the bottom. You’re always going to have air coming out the top and air pulling in the bottom.”

As that air moves through a house, it carries with it stuff—such as dust and insulation particles—pulled in through openings throughout the house (electrical outlet boxes, can lights, etc.).

Wes sets up a blower-door test, which pressurizes the house so he can measure air leakage to the attic and outside.

“The blower-door test gives us the number of how tight your house is,” Wes explains. “We also do an infrared test, which exposes what I call the invisibles, or any major things that are going on.”

Once everything is set, Wes makes his way methodically through my house, holding a smoke puffer machine, which shows him moving air. Every 20 minutes that the blower door runs provides 24 hours of air turnover data.

Some rooms, like our main floor powder room, elicit almost no movement in the smoke. Many other rooms show a steady flow of air. We head down to the basement.

We travel slowly through the house, eventually ending up on the second-floor landing.

“That’s screaming faster than the doors,” Wes says, holding the smoke puffer up to a can light. “This is what carries everything and is when we start to see the build-up.”

So: Seal the leaks and solve the problem? Nope.

“If we stop that airflow, we have to have a plan,” says Wes. “Because once we seal the leaks, you have less fresh air in your home. By law, we have to integrate ventilation; you have to make sure you have the right amount of oxygen.”

Wes then walks me through the house again, pointing an infrared reader at all the walls. Because it’s warmer weather, we see white spots where heat is coming in—through the can lights, some of the outlets, the smoke detectors, areas of wall where there isn’t insulation. In the winter, these same areas would appear blue on the infrared machine, where cold air seeps in.

He quickly sees why my son’s room has always been quirky—hotter in the summer and colder in the winter than the rest of the house. The back wall, against the garage attic, has no insulation.

“And we have a lot of connection to the outside in this wall,” he says, “Air is passing in and out.”

He points the infrared reader at a smoke detector in the hallway ceiling. “See the spray? That’s all stuff that brings in more junk from outside.”

“Now we take the numbers off the machine,” Wes says, heading back down to the kitchen, to his computer and other diagnostic equipment.

Turns out, my house is getting a good amount of fresh air from outside. “You’re recommended to have 7.2 air exchanges per day – meaning that 7.2 times per day, all the air in your house leaves and new air comes in,” Wes says. “You’re measured at 7.3 times.”

What this means is that Wes can’t recommend I do anything in my house—seal those leaking can lights or electrical outlets—without also adding ventilation.

“Because the minute you start sealing up those things, you start to get sick home syndrome,” he explains.

He does recommend that I seal the can lights over the master bedroom bed, and in my son’s room, since both my husband and son suffer from allergies.

The best solution is to install a heat recovery ventilator (HRV) in the attic, which would add fresh air to all the upstairs bedrooms and the main floor rooms. Stale air would be removed and the house pressurized slightly so that it pushes back, so to speak, for dramatically lessened dust and insulation particles in the air. He estimates the cost at $4,000—money well spent for far healthier air and also for our home’s resale value.

Understanding that such a project might not be in my family’s budget right away, Wes also suggests using standalone Daikin air purifiers in our master bedroom and our son’s room, at just a few hundred dollars per unit.

Above all, Wes stresses the importance of not going into a home and sealing any leaks willy-nilly.

“Because if we don’t check those numbers, we end up hurting people when we’re trying to save them,” he says. “Weatherization sounds sexy and wonderful, but it can easily push a home into sick building syndrome.”

Want to see Wes and Barron Heating in action? Watch several walkthroughs on their YouTube channel. Want to learn more about Wes? Just read the rave reviews he gets from customers. 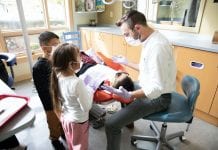 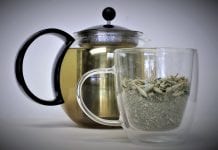